Cary, NC – The latest Cary Town Council meeting saw a Public Hearing on what may be Cary’s second-largest rezoning of all time, as well as a Public Hearing on a rezoning in the Alston Activity Center, a vote the lease for the new Downtown Cary library and parking deck and a presentation of the Environmental Advisory Board’s recommendations on trees.

The Thursday, August 15, 2019 Cary Town Council meeting saw the first public hearing to rezone all 87 acres of the Cary Towne Center mall property (with exceptions for out-parcels). This would rezone the entire site to Mixed Use Developments, with conditions to apportion uses across 19 blocks across the property. Uses allowed would be 600,000 to 1.2 million square feet of office and institutional buildings, 900 to 1,800 residential units, 100,000 to 360,000 square feet of commercial buildings and between 90 to 300 hotel rooms.

The plan also includes three different traffic corridors inside of the mall’s blocks, as well as street side trails and greenways on the exterior. In the traffic study, nine intersections are recommended for improvements and the applicant has agreed to seven of these. 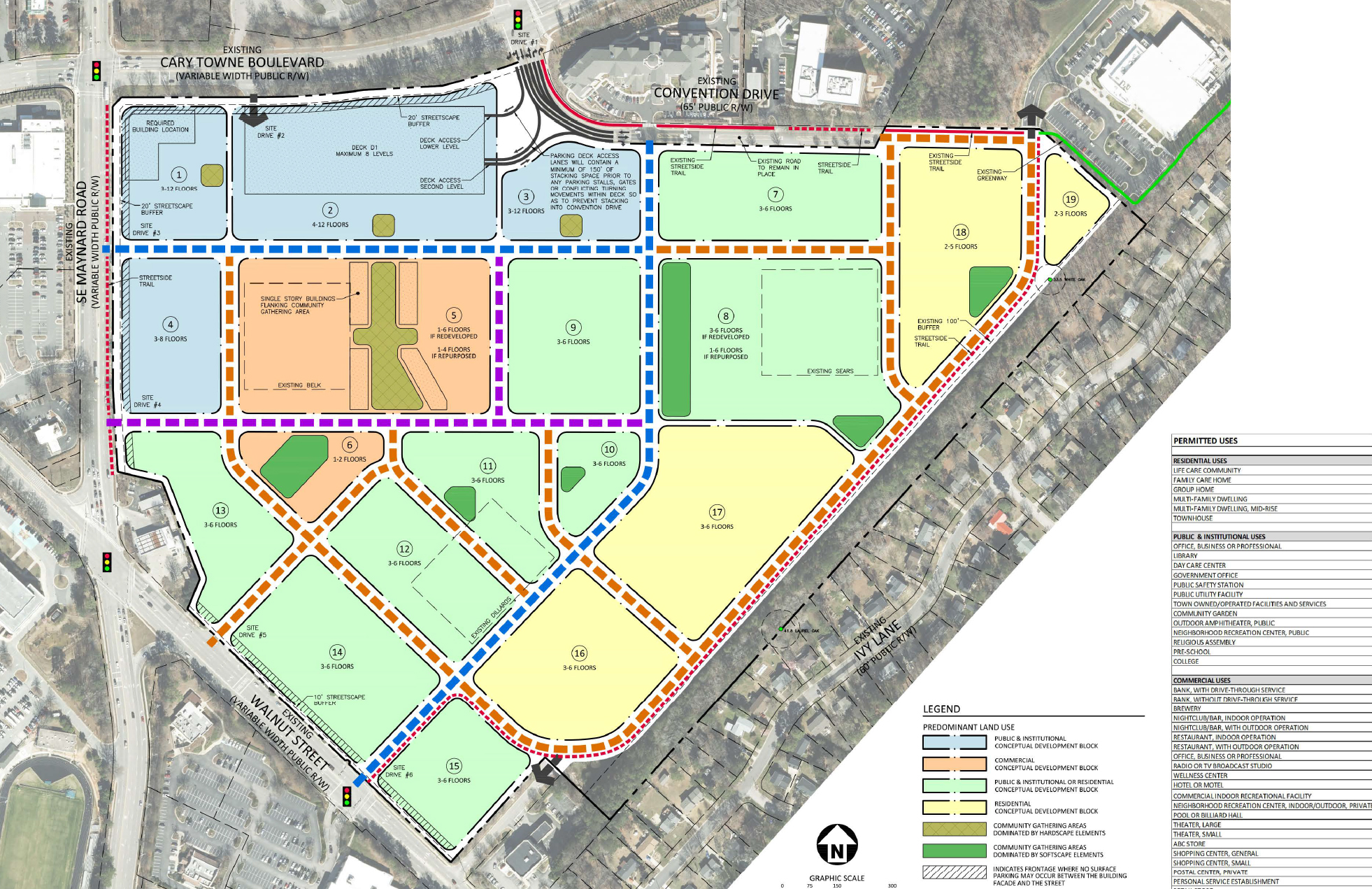 During the Public Hearing comments, one speaker voiced concerns about traffic increases and air pollution created by development, while also urging Town Staff to consider other possible uses on this site. Another speaker encouraged talks between the developer and Town of Cary to address the watershed on the site as well as stormwater generated on the property, while also saying some changes have already been made that he supports.

One speaker said she wants to see economic development in Cary but wants the site built in a way in line with Cary standards, contrasting the site with North Hills mall and describing it as a monster. Two speakers had questions about how the redevelopment would impact the GoCary bus routes, as Cary Towne Center serves as an interchange point (members of Town Council added there will likely be a Bus Rapid Transit corridor in this area). The strongest support came from a neighbor who said this is “responsible development” after fears stemming from Top Golf and IKEA’s potential plans in the past, though he did also ask questions about renovating the tree buffer and traffic improvements. Council Member Jack Smith did say, in his comments, that the tree berm should be improved, as he pushed for this buffer to be planted in the early 1990s but it currently “looks like an old shoe.”

Council Member Don Frantz noted that once a design guidebook is available, this will help both citizens and staff to better understand what this project will look like, as he said the Fenton’s guidebook did.

The proposed rezoning will be in a Work Session on Thursday, August 29, 2019 before going to the Planning and Zoning Board for their recommendation.

Town Council held a Public Hearing for 18.9 acres in the Alston Activity Center, rezoned for a Mixed Use District with a maximum of 330 multi-family dwelling units and 41 townhouses. This includes a Preliminary Development Plan to show the orientation of the units, stormwater retention pond. and community gathering space. The Cary Community Plan calls for this area of Cary to have higher residential density. 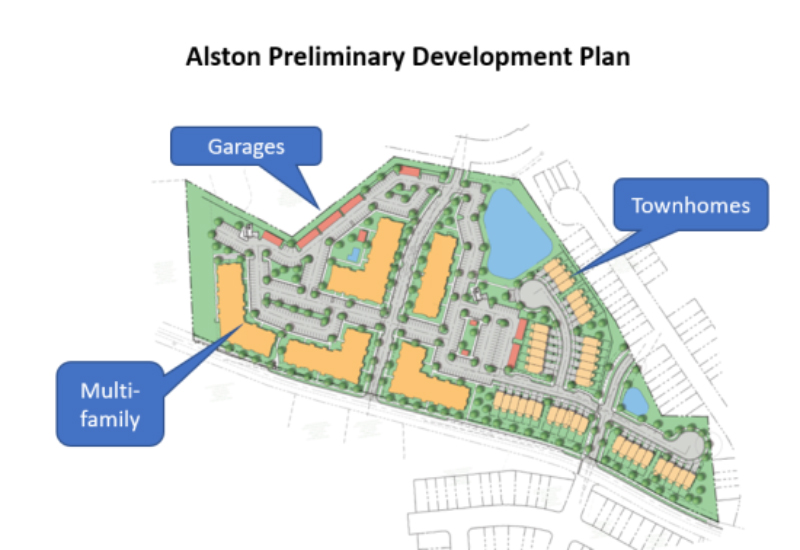 The Preliminary Development Plan for the rezoning in the Alston Activity Center.

Included in the rezoning are conditions to remove one champion tree and a 30 percent parking reduction around the multi-family units. Also, the developers will build the portion of a greenway that will run through the site.

There were no speakers on the Public Hearing but Council Member Jennifer Robinson suggested the proposed community gathering space is not large enough and warned the stormwater retention pond should be maintained and not be a “swamp.” Also, Mayor Pro Tem Lori Bush said increased residences here will make pedestrian crossing at NC-55 much more difficult, if not impossible.

The rezoning then went to the Planning and Zoning Board for their recommendation.

There was a Public Hearing to amend a rezoning on an office and institutional building on White Oak Church Road to include medical office uses. There are also conditions attached that the medical use cannot exceed 5,000 square feet of the site.

And there was a Public Hearing on changes to Cary ordinances. Several of these are minor, remove outdated ordinances or relate to updating the names of certain organizations. But two ordinance changes are the result of new state laws. These being: down-zoning by a third party is now prohibited and an applicant must resubmit an application or permit after six months, when previously it was 90 days, of inactivity.

All three of these Public Hearings had no speakers and no council comment and were sent to the Planning and Zoning Board for their recommendation.

In their Discussion Items, Town Council heard the Environmental Advisory Board’s Tree Advisory Committee present their recommendations. These are:

There were three speakers at Public Speaks Out to talk about these recommendations. Two broadly spoke about wanting more tree canopy preserved and wanting an urban forester. One other speaker not only supported the recommendations but also asked for more information on Cary’s position on overall carbon and greenhouse gas emissions.

All Council Members spoke on the recommendations and all sounded favorable, particularly on the topic of hiring an urban forester. Mayor Harold Weinbrecht added he wanted to see more information and details on not only the financial impact but also the legal impact as state law may impede some of these objectives.

Council did not vote on these recommendations and are instead taking them, and supplemental staff information, under consideration.

The one vote Town Council did take was to approve the primary terms and conditions for the ground lease for the Downtown Cary Library and parking deck, now leased to Cary by Wake County. Council voted unanimously in favor.

During the Public Speaks Out segment, two different speakers talked about the proposed zoning amendment for Phase Two of SearStone. One speaker supported the amendment outright, mainly because it will increase green space. Another speaker listed a number of needs and “high standards” he had for SearStone’s expansion, including traffic mitigation and outdoor activities.

Other speakers included a representative for the “Steam Program” to boost young women’s self-esteem, looking for ways to get more involved with the Town of Cary, and a resident who said he is having conflicts with the neighboring MacGregor Downs Country Club about removing trees buffering his property and their golf course.

Story by Michael Papich. Photos courtesy of the Town of Cary and Hal Goodtree.

Lazy Daze Returns with Celebration of Arts and Summer