You may not know it from the final score but for the first half of the match, it looked like both teams may be at a stalemate. Neither team were able to score, despite several chances on both sides. But right before halftime, Dre Fortune got fouled by Pittsburgh player Thomas Vancaeyezeele, resulting in a red card and a penalty kick. Even after being taken down, Fortune looked cool and composed and he sank his penalty kick with ease, giving the home team a 1-0 lead.

But the score would not stay there for long. Fortune was back in the mix in the 50th minute as he curved the ball over to Donovan Ewolo. Ewolo must have been especially pumped as he hit an incredible, high angle shot that got NCFC up to 2-0. Ewolo wasn’t done there, as he got another penalty kick after Pittsburgh got a handling foul. While Ewolo missed his initial penalty kick, he moved fast and got the rebound, sinking the shot and giving NCFC three points.

And once again, Fortune made his presence felt in the game as he got in close to the opponent’s net. From there, he received a pass from Steven Miller and got the ball through Pittsburgh goalkeeper Kyle Morton. But the game did not end there, as Robbie Kristo, substituted into the game in the second half, moved into position after a pass from Nazmi Albadawi. Kristo made a picture-perfect kick and brought NCFC up another point.

Throughout the game, with both their defense and their aggressive control of the ball, NCFC denied Pittsburgh a single goal, so the game ended with a huge 5-0 score – the team’s biggest margin of victory this season. 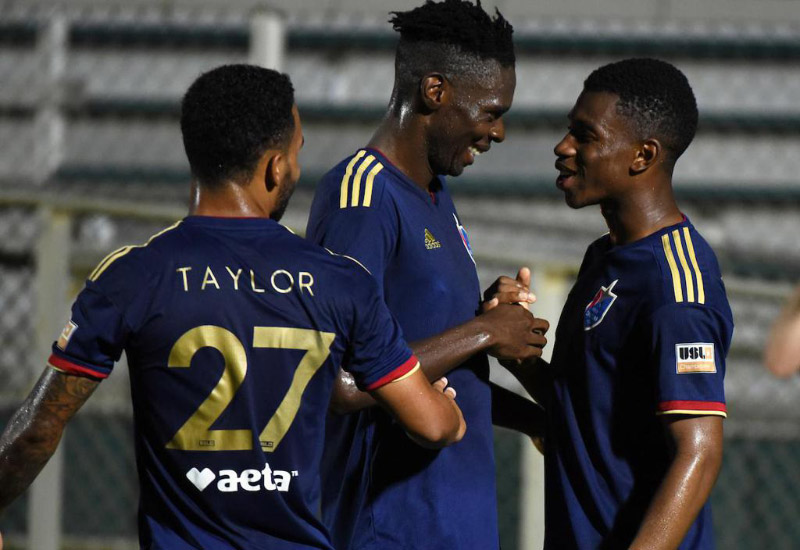 With their Saturday win, NCFC is now the fourth-ranked team in the USL’s Eastern Conference.

“I think our guys had a very professional performance tonight,” said NCFC Head Coach Dave Sarachan. “Even getting a second and a third; they just didn’t let their foot off the gas.”

With his two goals, Ewolo now has seven goals this season, tying him with Steven Miller as the team leader for the year.

This was also the first home game for Austin da Luz since he announced his retirement at the end of the year. da Luz started playing for the Carolina RailHawks in 2012. NCFC substituted da Luz into the game in the second half.

NCFC takes on the second-ranked Tampa Bay Rowdies later this week at home, playing on Wednesday, August 21, 2019 at 7 PM.