Cary, NC – North Carolina FC beat one of the top teams in the USL Eastern Conference at home in flashy fashion, climbing up the conference rankings in the process.

North Carolina FC took on the Tampa Bay Rowdies, formerly the second-ranked team in the conference, on Wednesday, August 21, 2019 at Sahlen’s Stadium at WakeMed Soccer Park. The Rowdies have made a name for themselves as a defense-heavy team and one of the league’s best in that regard, but NCFC seem to have figured things out as they’ve now beaten them twice this season, once away and once at home.

However, it was not an easy-won victory. The game started off promising as Dre Fortune, NCFC’s young star, scored in the 19th minute fresh off his hot streak in this weekend’s match, by hitting a shot from the middle of the field after a pass from Justin Rennicks. Tampa Bay’s defense started up from there, getting control of the ball and keeping NCFC from adding on more points in the first half. Then, in the 32nd minute, Rowdies captain Sebastian Guenzatti got a goal of his own, tying the game up going into the second half.

But in the 50th minute, things really heated up. Fortune was back in the mix, this time passing to Steven Miller with a corner kick. That put Miller right off to the side, in perfect position for an expertly slotted shot, giving NCFC a 2-1 lead. During this time, NCFC substituted in North Carolina native Manny Perez, who sped toward Tampa Bay’s goal. Perez got behind Tampa Bay’s defense and caused an own goal on Pape Diakité, getting the score up to 3-1.

That was not the end as Miller got a second goal, taking a shot from the 18-yard box after getting a pass from Raleigh’s DJ Taylor. It went in and NCFC got the 4-1 lead. In the 90th minute, Tampa Bay’s Juan Tejada got one more goal for the away team but it was too little too late as NCFC won 4-2. 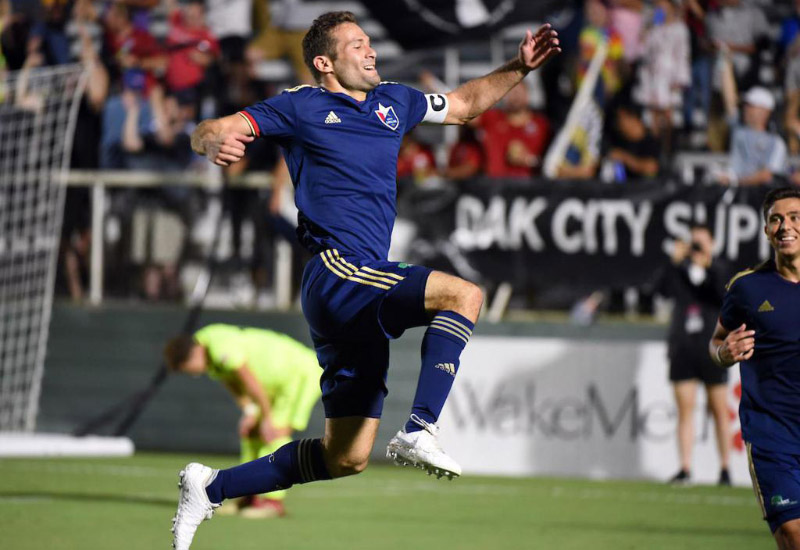 With this victory, NCFC has gone from being the fifth-ranked team in the Eastern Conference to the second-ranked, behind the New York Red Bulls II.

“We’ve scored nine goals in the last two games, which is very encouraging,” said NCFC Head Coach Dave Sarachan. “I think the combinations on the field, the movement, the belief and the willingness to get in the box and be dangerous has gotten through to this group.”

Miller continued his streak as NCFC’s leading scorer this season, now up to nine goals. Fortune, still a stand-out for the team, is tied for second-leading now with seven goals.

NCFC hit the road this weekend but their next home game is against Bethlehem Steel FC on Saturday, September 7, 2019 at 7 PM.