Cary, NC – As expected with two historically tough teams, the North Carolina Courage and Seattle Reign FC were close matched for the majority of this past weekend’s home game, with the Courage finally winning with a goal in the final minutes of gameplay.

The North Carolina Courage took on Seattle on Saturday, August 24, 2019 at Sahlen’s Stadium at WakeMed Soccer Park. All of the Courage’s participants in this year’s World Cup were there to fill out the team but they still had a tough fight ahead of them.

Even with an incredibly aggressive start, with 11 shots on goal from the Courage in the first 35 minutes, they were unable to score against Reign FC. The Courage was particularly focused on using their corner kicks to set up goal attempts, relying on Abby Dahlkemper and Merritt Mathias.

In the 40th minute, it looked like the Courage finally had their opponents rooted. Kristen Hamilton had a free kick outside the box but in an expert move, she passed the ball among the team quickly, setting Debinha up for a big kick. It was a brilliant play but Seattle goalkeeper Casey Murphy was able to block the shot by a fingertip.

With so much control over the ball, the Courage prevented any goals on their own net and the score was 0-0 at halftime. And as the second half rolled on, it seemed like it would be more of the same, with constant attacks from the Courage and saves from Murphy.

But then, with only ten minutes left on the clock, Jessica McDonald got into position near Seattle’s goal and passed the ball to Crystal Dunn. Instead of taking her own shot, Dunn saw Lynn Williams near the end line, perfectly centered, and slipped the ball to Williams. From there, Williams had a perfect opportunity to score and she took it. In the 82nd minute of gameplay, we saw the first goal and the Courage were up 1-0, which is exactly where the game ended. 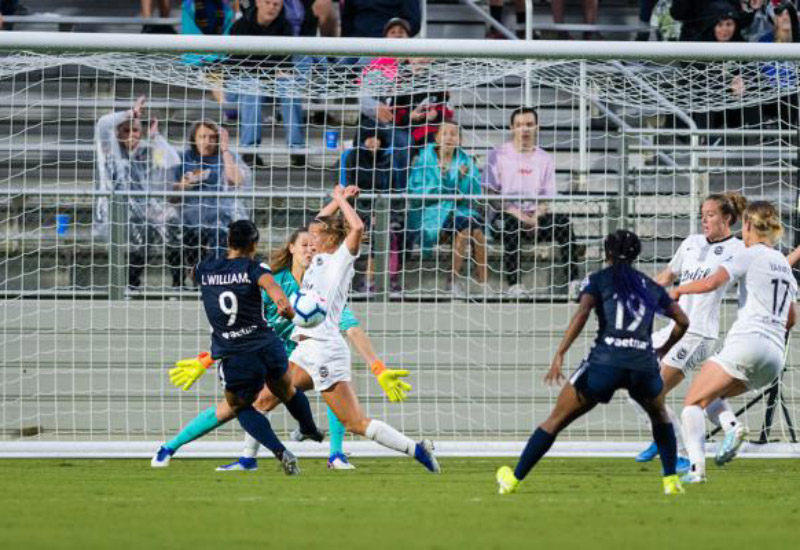 Saturday’s game was the highest-attended Courage match this season, and fans got to see the home team not only win but rise up the rankings to be the second-placed team in the NWSL.

In the rankings, the Courage are now only behind Portland Thorns FC, their rival and the team that beat them for the NWSL Shield in 2017.

The next home game is Saturday, September 14, 2019 against the Orlando Pride at 7 PM.