Cary, NC – This week was a busy week with most activities occurring on the weekend.

Monday’s meeting with the town manager was cancelled due to his vacation.

Tuesday I met with two representatives from the Taylor Family YMCA.  The YMCA is working on their Long-Range Plan for the next 10 years. As they prepare for that Long-Range Plan the Corporate Development Office is interviewing local officials and leaders to help them shape their vision. I answered dozens of questions and told multiple stories in addition to providing information about how I thought Cary will grow in the future. We talked for about an hour.

Wednesday I chaired a meeting of the CAMPO (Capital Area Metropolitan Planning Organization) Executive Board. There were only three items on the agenda. In our only decision we approve staff’s recommendation for Transit Asset Management Performance Measures and Targets for State of Good Repair. The Board all received information about the fiscal year 2020-2029 Transportation Improvement Program and the Federal Rescission Update. Our meeting concluded in a record time of 25 minutes.

Later Wednesday I dropped by early voting. Approximately 200 votes had been cast up to that point on the first day of early voting. I talked with all three candidates for district D: Ken George (incumbent), Ya Liu, and Beth Friedrich. While all three are great people, I am supporting my current team member, Ken George.

Thursday I joined Mayor Pro-Tem Bush and council member Yerha for the official ribbon cutting of Green Level High School. Principal Summers was the emcee to about 50 people. In attendance were Cary officials, county officials, school board officials, contractors that helped with the project, parents, and longtime residents of the Green Level area. The ceremony included a video of the history of Green Level. This was followed by speakers from the county and school system. The Principal also unveiled the name of the Gator mascot, Mater the Gator. The last part of the ceremony included the actual ribbon cutting. All officials grabbed scissors and cut the ribbon in front of the stage area after a countdown from three. I am so proud to have another high school in Cary. We now have five public high schools: Green Level, Green Hope, Panther Creek, Middle Creek, and of course Cary.

Friday I participated in a meeting of the North Carolina Metro Mayors. Here is the summary from the Executive Director:

Beau’s Brief OPENING remarks – redistricting dominated the week as the NCGA voted on and then submitted new maps for the 2020 elections to the three-judge panel.

H29 – Standing up for Rape Victims, a mini-budget for rape evidence kits – Beau

Saturday I joined the cast and crew of the play “Becoming a More Perfect Union” for our dress rehearsal. We spent several hours practicing and still needed more when we stopped.

Sunday started by giving remarks at the Unity Walk event at Wake Med Soccer Park. The Cary Unity Walk is an event to celebrate citizens working together to support local first responders and create a safe, unified, and nurturing community for our youth and our future. This year the Cary Unity Walk is helping support the Triangle Apartment Association’s nonprofit organization “A New Lease on Life”. In my remarks I talked about how blessed we were to live in a safe and unified community. I closed by thanking our police officers who put their lives on the line every day so that we can be safe. God bless each and every one of them!

My next event on Sunday was the Daughters of the American Revolution play, “Becoming a More Perfect Union”, which was written by Katherine Loflin and performed in the Cary Theater. This was a play that told the story of how the constitution was written. I had the honor of playing George Washington which was one of the main characters. Fortunately, I didn’t blow any of my lines. This was my first play and it was a lot of fun. After the play there was a procession which paused at the United Methodist Church for me to read a proclamation. Then we continued on to a reception at the Cotton House and the Mayton Inn. I hope to be involved in a production next year. 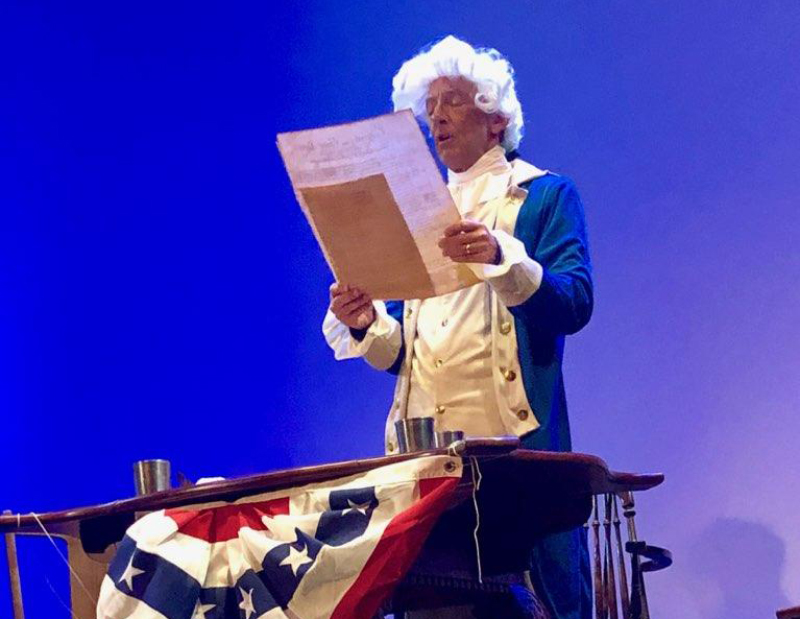 My last event Sunday was the annual volunteer picnic for the Parks, Recreation, and Cultural Resources. There appeared to be a couple of hundred volunteers who were treated to a catered cookout style dinner. The evening culminated with awards. A big thanks to all these volunteers. They are one of the main reason our Parks program won the Gold medal and is ranked the number one park system in the nation. 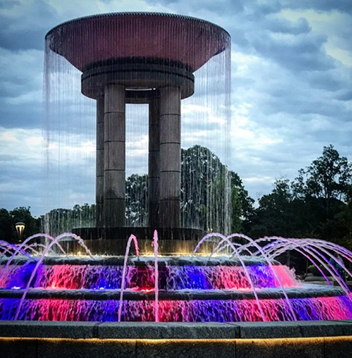 In celebration of Constitution Week, the fountain in the downtown park sported its patriotism in red, white, and blue, and “Betsy Ross” flags proudly flew at many Cary facilities. 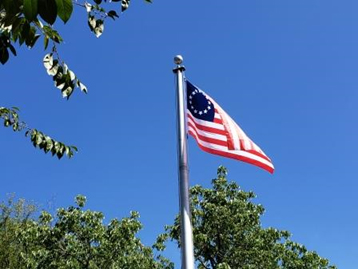 Constitution Week, September 17-23, celebrates the American government’s foundational document. The United States Constitution stands as a testament to the tenacity of Americans throughout history to maintain their liberties, freedoms and inalienable rights. In 1955, the Daughters of the American Revolution petitioned Congress to set aside September 17-23 annually to be dedicated for the observance of Constitution Week. The resolution was adopted by the U.S. Congress and signed into public law on August 2, 1956, by President Dwight Eisenhower. 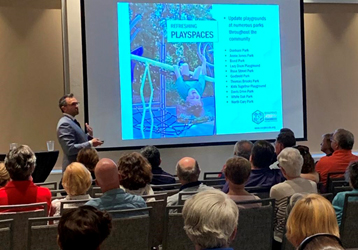 Just like the first community meeting on the bonds, the second went extremely well. Thanks to those Council members and staff who were able to attend. The turnout was incredible and a testament to how engaged Cary citizens are with their community. Between the two meetings, we reached more than 300 citizens with information about their upcoming choices. Russ Overton will deliver our bonds education presentation on Tuesday at the annual boards and commissions event, and several other presentations are scheduled between now and Election Day. 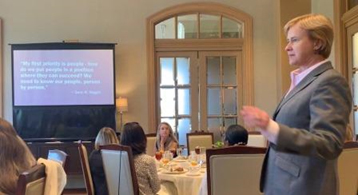 Susan Moran was the featured speaker at this month’s Cary Chamber Business of Women luncheon. In Wine, Women, and Working for People, she talked to about 70 attendees on how Cary is working to create the local government that doesn’t exist by discovering the unique gifts and characteristics of individual employees and encouraging them to bring their whole selves to work. 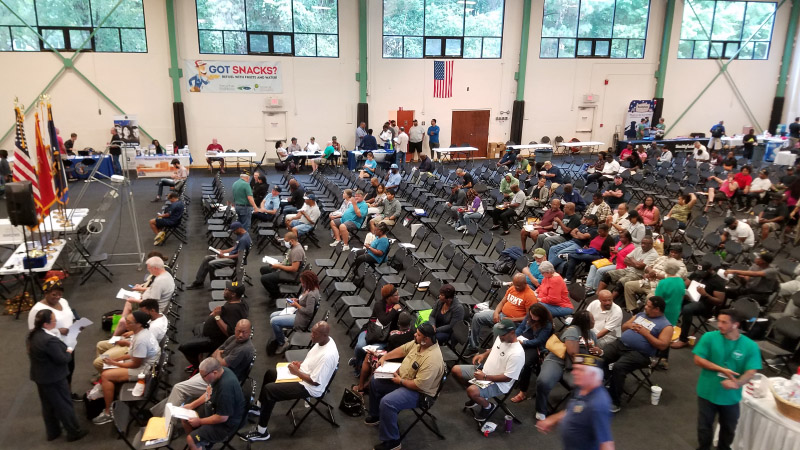 Serving those who served us, the Town of Cary hosted veterans and their families in the Herb Young Community Center for the September 12-14 Veteran’s Experience Action Center. American Legion Post 67, led by 1st Vice Commander Richard Spyrison, teamed up with a variety of agencies to conduct event. Over the course of three days, 1,130 veterans and their families received assistance in areas such as veteran’s benefits claims, mental health treatment and other health care concerns. Veteran service officers from throughout North Carolina were present to assist with the claims process. Veterans came from as far away as California and Washington to receive assistance. Thank you to Secretary Hall of the NC Department of Military and Veterans Affairs and his staff, as well as Mayor Weinbrecht, Council Member Jack Smith, and House Representative Allison Dahle for stopping by to mingle with the veterans. Thanks also to Smithfield’s, Bojangles, Biscuitville, Bakers Dozen, McDonald’s, Jersey Mikes, Costco and BJ’s for providing food and snacks for our veterans. 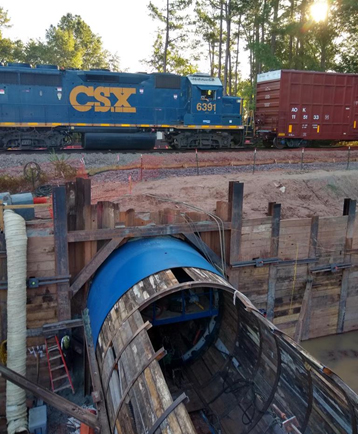 Construction on the White Oak Creek Greenway Pedestrian Tunnel continues. Using the specialized equipment put into place for the purpose, the contractor is excavating the pedestrian tunnel under the CSX railroad with a goal of moving forward six feet every 24 hours. The completed tunnel will be 14 feet in diameter and 102 feet long. 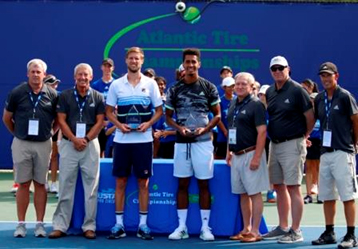 For the first time, the tournament was broadcast on Tennis Channel giving the event national exposure. Aside from exciting tennis, the tournament hosted many community events:

ATP Players also attended youth clinics and a mixed doubles round-robin, allowing participants to interact with the professionals and ask them questions about life on the tour and keys to success.

In its fifth year, the tournament experienced a 100% increase in ticket sales from 2018. Stadium Court was filled every evening with spectators cheering on their favorite players. The tournament’s success is due to sponsor support, the dedicated staff at Cary Tennis Park, and the collaboration between Town of Cary departments. 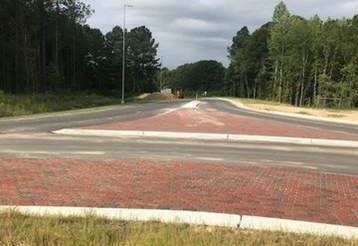 Beginning the week of September 23, the parking lot between the multi-purpose fields and baseball fields will be expanded by 27 parking spaces. The work is expected to take two weeks.

Beginning the week of October 7, Black Creek Greenway from Castalia to Bond Park will be resurfaced. Intermittent closures will occur for up to two weeks. Work is being scheduled around the many events at Bond Park. 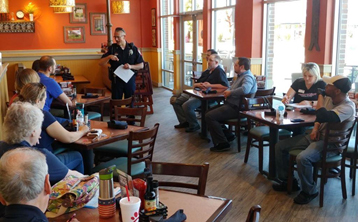 Police in the Community

The Cary Police Department, led by Corporal Ed Page, met with business owners at Parkside Town Commons to hear their concerns and to discuss crime trends on Thursday. Thanks to Another Broken Egg Café for hosting the meeting. 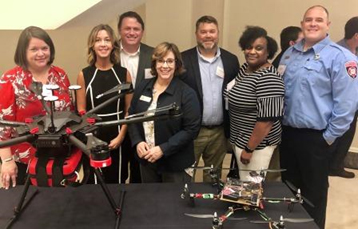 Mayor Pro Tem Lori Bush, along with NC State Chancellor Randy Woodson and other area elected officials, accepted a $24 million Aerial Experimentation and Research Platform for Advanced Wireless (AERPAW) grant from the National Science Foundation and US Ignite. The grant will be used to build a state-of-the-art wireless platform linking drones and 5G technology. Platform test sites will be constructed at Cary, Raleigh and NCSU facilities as well as other university sites across the country. Various drone and 5G experiments in public safety, transportation and healthcare will be conducted on the platform. Cary and other grant partners will provide infrastructure such as towers and testing grounds in exchange for participation in the experimental research and data collection. More information can be found at the AERPAW’s website and in the News Release. Representatives from Cary’s Marketing and Information Technology Department and Drone Committee also attended the event. 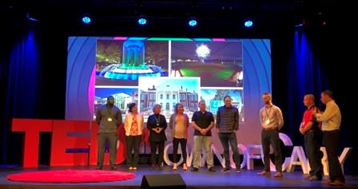 Special Kudos to Matt Joyner, Jimmy Simpson and Brandon Roberson for stepping up and creating a special event for staff, TEDx Town of Cary. I am honored and proud to be a part of an organization where good ideas come from everywhere. This collaborative milestone provided a venue where Town staff members could share ideas and experiences in a positive, supportive environment. Speakers Marie Cefalo, Anna Crollman, Steve Lupinacci, Theron Richardson, Kim Berthiaume, and Scott Hecht shared their ideas and their hearts, making it a impactful experience for all.

Well, that is all for this week. My next post will be on Sunday, September 29th.  Although I have Facebook and Twitter accounts those are not the best means of communications with me. Please send all Town of Cary questions or comments to Harold.Weinbrecht@townofcary.org and email personal comments to augustanat@mindspring.com.