Cary, NC – After losing to the Ottawa Senators 4-1 two days before in Canada, the Canes bounced back big time on the home-and-home series by trouncing the Sens, 8-2 on a rare Monday night game.

All teams can say they’re in a rebuilding mode as it’s rare, even for a Stanley Cup champion, to remain the exact same team, but the Senators are rebuilding in a major way. Similar to the Canes of just a few years ago, the Senators have a few good young studs but have to many holes in their lineup to be classified as a Cup contender. All the more reason the Canes were looking forward to breaking their three-game losing streak on Saturday, only to be out played to take what turned out to be a long ride back to Raleigh.

The short one game home stand for home cooking was just the ticket as the Canes bounced back in a big way and won 8-2, in a game coach Rod Brind’Amour and his staff had to be pleased with how the team as a whole responded.

Before many were in their seats, the Canes had a 1-0 lead. To shake things up, Roddy changed some lines, putting former Senator Ryan Dzingel on the line with Jordan Staal and Warren Foegle. Staal won the opening faceoff and the Canes were off and running. After Brett Pesce kept the puck in the Sens zone, Foegs and DZ had a nice give and go with Foegs taking a shot that was initially stopped by Anders Nilsson but the puck trickled through barely having enough momentum to cross the goal line at the 44-second mark.

The transition play for the Canes was noticeably much better than Saturday’s game. There was a methodical method of clearing the puck, carrying it through the neutral zone and entry into the Sens’ end. It wasn’t all dump and chase but more of possession ensuring control. With the Canes attacking, Thomas Chabot made a nice defensive play that gave the Sens a partial three-on-two but Dougie Hamilton made a nice recovery and broke up any threat.

Brian Gibbons, who is a call up from Charlotte but has played in nearly 200 NHL games throughout his career on various teams, including Ottawa, was digging for the puck in the near corner when Bobby Ryan hit him hard from behind on what appeared to be boarding but the refs obviously saw it differently (Replay showed it was boarding).

Brock McGinn, who was questionable for the game after blocking a hard shot last game off his elbow, stepped up and challenged the much bigger Ryan. It was a nothing bout but says plenty of Ginner as a team player and the tightness of this Canes team. JG Pageau got called for interference putting the Canes on the powerplay. Lucas Wallmark won the faceoff sending it back to Jake Gardiner who sent a bomb towards the net.

Vladislav Namestnikov sacrificed his body and block the shot sending it far side right to the stock of Martin Necas who banged it home for a powerplay goal. Roddy has to be pleased with the Canes’ first period as they were aggressive with every skater playing a 200-foot game. 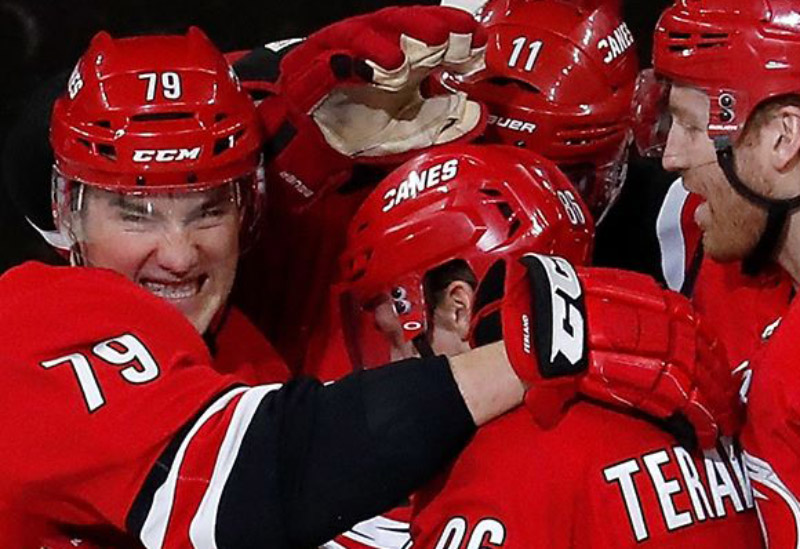 Early in the second, with Gardiner in the box, Sebastian Aho had the best penalty kill shift of his career. First, he cheated in to the mid slot breaking up a pass however the Sens retained possession sending it up to the left point. Seabass went up to his defensive position covering defenseman Dylan DeMelo. Seabass used his long stick to break a pass then pushed it forward to allow for a breakaway.

The Canes must have had a tape session after Saturday’s game as Seabass went high stick side for his second shortie of the year and put the Canes up 3-0. The Canes continued their dominance of the game in all three zones with forechecking being the difference between the two teams. Just as the Canes entered the Sens’ end, the Canes were making a line change for the defense. Haydn Fleury hopped over the boards and was fed a pass by Checkers callup Eetu Luostarinen. Fleury went around a forward deaking towards the boards. Keeping his speed he let go a shot that tipped the blade of his defender just enough to be redirected into the near upper corner for his second goal of the season and career.

All of a sudden, Fleury is tied for most goals on the Canes’ defense. Less than four minutes later, Andrei Svechnikov won a battle in the near corner passing up to Turbo. Turbo dangled the puck and with nowhere to go, sent a cross ice pass to Hamilton racing over the blue line, sending a hard shot high blocker side for a commanding 5-0 lead.

After feeling left out of the action as there could be no other reason, on a dump in by the Senators, Petr Mrazek went behind the net to stop the puck. Problem was it was a bouncing puck and only Colin White was charging in on the backside. The puck bounced over Mrazek’s stick, allowing White an easy wrap around to break the shutout.

Edmundson Pots First With the Canes

The Canes could have been satisfied with the 5-1 lead going into the third, but letting up on the gas was a Cane thing of the past, not for this team. The Canes pressed deep in the first minute with a scrum at Craig Anderson’s doorstep. As the puck was blocked into the air, Seabass batted it in with his stick legally below the height of the crossbar for his second of the game. A few minutes later, Brady Tkachuk, arguably the Sens’ best player, tucked one in to close the gap in trying to make a game of it.

Former Senator, Dzingel slapped home a juicy rebound off a shot by Joel Edmundson to make it 7-2. Late in the game, Edmundson got his first goal as a Cane with a slap shot from the right point with no one in front that somehow completely fooled Anderson. The game had all but four Cane skaters record at least a point, with seven players getting multiple points.

Edmundson was the game’s #1 star with three points, all firsts with the Canes. It’s nice to see every player on the team with points and shows a well balanced team.

Next home game is Thursday, November 21, 2019 against the Flyers, who always bring their game, fans and respective reputations to the PNC. Be there! 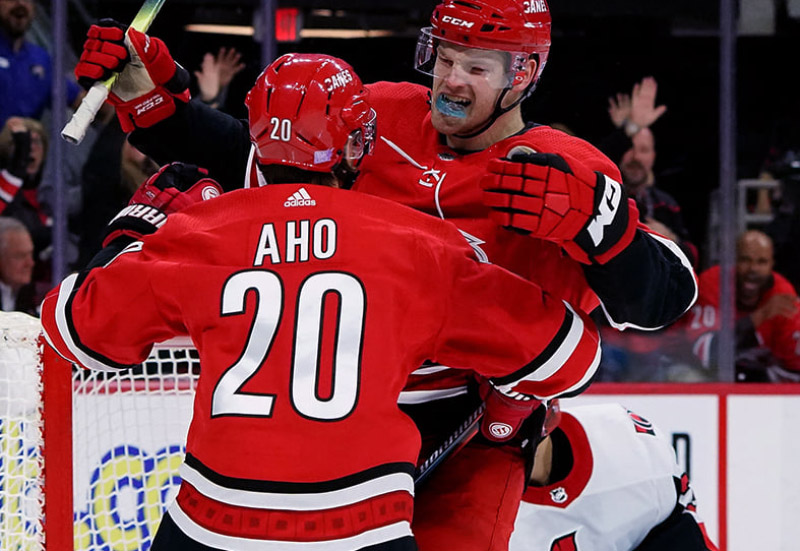 Cary’s Heritage: The Homefront During WW2