Cary, NC – For all those that have played team sports, one of the worst times is after not only losing a game but losing a game that had very little team effort, then knowing what’s coming in the locker room afterwards. The game against the Nashville Predators was one of those games.

The Canes should have had everything going for them: a sellout crowd, including my better half along with my sister visiting from out of state, playing two days after a weak effort against the Rangers. This would be a prime opportunity to turn that around, against another team with fewer points and the incentive not to have another after game talk by coach Rod Brind’Amour on poor play. One thing the Preds had going for them was Pekka Rinne in goal who was outstanding and clearly deserved the 3-0 shutout. 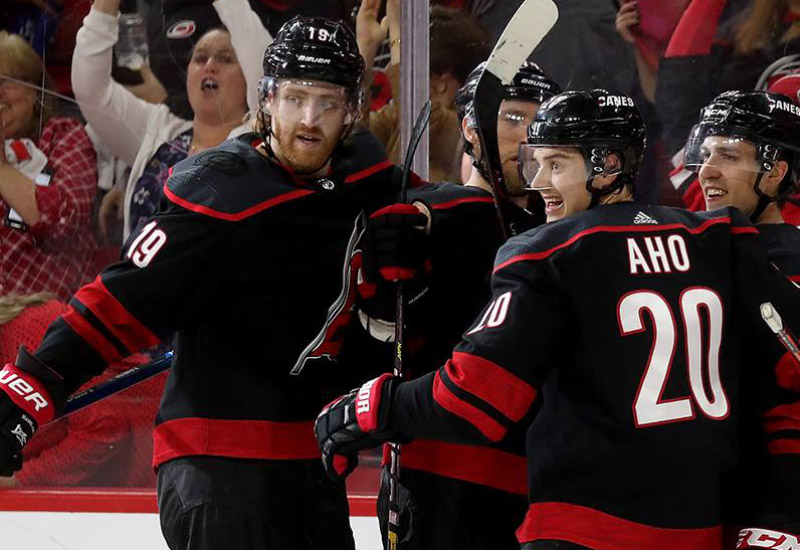 Great Start, But The Game Is 60 Minutes

If the Canes played 60 minutes like they played the first eight, the game could have had a different outcome as the entire Canes team had their jets on after-burner speed. The Canes won every battle along the boards, in the corners, quicker on the puck and had three or four passes in a row that connected. The top line of Sebastian Aho, Teuvo Teravainen and Andrei Svechnikov looked great and had that chemistry going that makes them difficult to defend. The passing between Turbo and Svech on several plays was world class but when a shot evolved, Rinne was like a wall.

Then the bottom fell out. Just over the eight minute mark, Nick Bonino, a perennial thorn in the Canes’ side, did an alley-oop flip from deep into the neutral zone as he saw Rocco Grimaldi going hard along the right wing. Grimaldi shared the puck going in on Petr Mrazek all alone stuffing the puck in under the right pads. That dagger seemed to take the wind out of the Canes’ sails as the game completely turned around. Svech got the games first penalty on completing a check that was after the nearby play had passed and he knew it as soon as ref Francois St. Laurent’s arm went up. Not unusual, but all four Canes’ penalties were called by St. Laurent.

The Canes’ penalty kill defense was good and while they gave up four shots, all were from the point with clear alleys for Mrazek to make saves without rebounds. Late in the period, Jaccob Slavin had his stick knocked out of his hands in his defensive zone and the Preds took advantage with Filipino Forsberg making a sweet cross ice pass to Calle Jarnkrok for an easy goal, totally clearing the starch out of anything the Canes had left.

Penalty Kill is Only Shining Light

Early in the second, the Canes’ third line was in the attacking zone and playing aggressive, jumping on any loose puck. Martin Necas stole a puck along the boards, passing over to Lucas Wallmark. Wallmark saw Ryan Dzingel off the left side of the crease, sent a beauty of a pass with DZ sending a one timer right into Rinne’s glove for a “Hello, did I do that?” save.

One of the advantages of home games is the home team gets the last line change during a stoppage of play. Somehow, Peter Laviolette pulled a fast one on Roddy as the Preds had part of their top line out against the Canes’ fourth line. That line of Brick McGinn, callup Clark Bishop and Jordan Martinook could have been the Canes’ most effective line of the night. but on this shift, they were outmatched. Once Marty was spun around and went down in the defensive zone, if only for a couple seconds, that’s all it took for the Preds to take advantage with Matt Duchene starting the play with Austin Watson punching it past Mrazek to all but seal the game.

The Canes went two full power plays without a shot, which is just pitiful. The Preds powerplay was just as bad. Their entire powerplay offense plays flat-footed. Very little traffic in front with passing between the defense along the blue line without moving their feet. No wonder they rank near the bottom in the league for powerplay effectiveness. 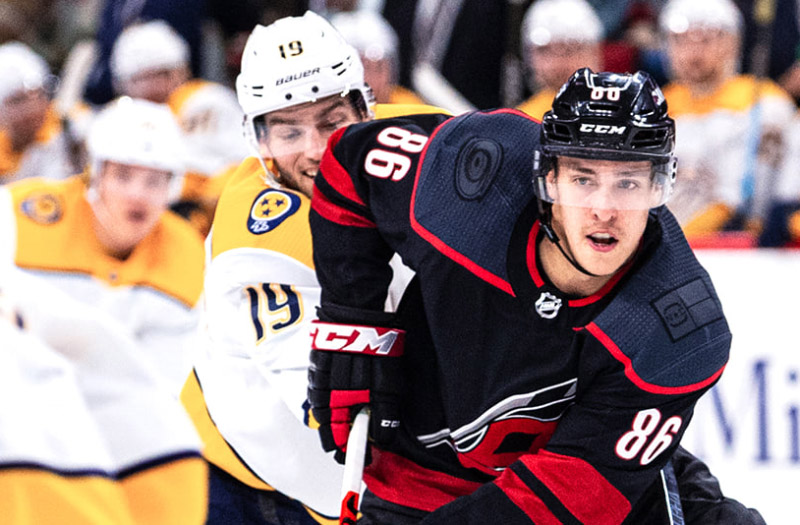 Canes Just Out Of Gas

The Canes must have all spent the second intermission riding bikes in the workout room as they appeared dead tired. Seabass needed to stay at least six feet off the boards as he was pushed off the puck every time. In open ice he’s fine, but is too small to fight and win a battle for the puck where he can be manhandled. Forechecking was a forgotten part of the Canes’ play and once film is reviewed, the coaching staff will certainly point that out and hopefully the players will recognize that before being told.

For the second game in a row, Warren Foegele had a good game and may have been the Canes’ best player. While Foegs is a fine player, it should be that he’s cited as the best player two games in a row. Ginner also had a good game and Bishop has nothing to hang his head about his play other than the team loss.

Next home game is Thursday, December 5, 2019 against San Jose and one of the best defensemen in the NHL in Erik Karlsson. Be there!