The Hurricanes broke free of their new year losing streak when they defeated the Philadelphia Flyers Tuesday night in overtime.

For the second game in a row, even with a different goalie in net, the Canes gave up a goal on the first shot of the game. While it’s certainly not how Rod Brind’Amour wanted the game to go, there was no panic on the Canes bench by either the players or coaches. Defensive miscues and weak goaltending also continued for the second game in a row and that was not sitting well with the Canes bench boss. After falling behind 2-0, the Canes got 4 unanswered goals with the Flyers knotting the score with under 4 minutes left, sending the game into overtime where Dougie Hamilton scored at 1:56 to get the Canes’ first win against the Flyers this season.

Goaling James Reimer hasn’t played at the PNC Arena in a long time as Roddy has given the nod to Petr Mrazek more often lately. Not how he wanted to impress the coach for the start, Reimer had to want another attempt at the first shot that appeared to be a weak shot. In all fairness, the defense had poor coverage and the shot was more of a knuckleball rather than a crisp shot with a normal trajectory but the shot found the Canes in a hole with just 37 seconds gone. Travis Konecny, the goal scorer, and Andrei Svechnikov were going at each other all night that kept the linesmen busy keeping the two apart. Both were taking every opportunity to whack each other however late in the game, Svech is the one who got caught on a retaliation whack.

Svech received a headman pass allowing him to go in on Brian Elliott a step ahead of a defender. He tried a highlight reel shot, going between the legs but Elliott made a good pad save. Shortly after that with the puck in the Canes end, a weak clear by the defense was picked up by Jacob Voracek who passed to Michael Raffl who had time, space and the choice of shot on Reimer going backhand to forehand shoveling it in along the ice. Roddy got a little more animated behind the bench and the Canes responded.

Brock McGinn dumped the puck deep and used his speed to chase it down getting a shot that might have been a shot for a kick save/pass. Whatever the intention, the pad save went to Lucas Wallmark’s skate with Wally kicking the puck to his stick and lifted a forehand shot to the top of the net for the Canes first goal. Just over the 15 minute mark, Jake Gardiner passed the puck to Jordan Staal along the far half boards. Staal used his body to protect the puck, looked up and saw Warren Foegele cutting towards the net off the left wing. Staal made a great pass that Foegs punched in to tie the game and get the Caniacs back in the game. 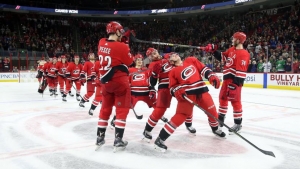 As the second period started, Erik Haula was finishing a major portion of a tripping penalty from late in the first. The Canes penalty kill units were outstanding. Nothing flashy, just good forechecking, strong in front of the crease not allowing any screens and actually seemed to have more possession time than the Flyers powerplay. As the PK ended, the Canes had the puck in the Flyers zone when Foegs won a race to the puck along the near boards but got slammed, legally, into the boards but he was able to get the puck up to Sebastian Aho on the right point.

Seabass passed over to Gardiner on the left point who wound up and sent an absolute bomb of a slap shot into the net to get the Canes their first lead of the game. Less than two minutes later, the Canes again were pressing in the Flyers end. Haula won a puck sending it up to Hamilton who quickly passed over to Joel Edmundson in the high slot. Eddy wasted no time in sending a hard shot into traffic as Haula went to the dirty area distracting Elliott with the puck finding the back of the net. Late in the period, Jaccob Slavin had the puck below the goal line near the far corner and in a rare instance, turned the puck over to Nicolas Aube-Kubel just 8 feet from the net who squeezed one in under Reimer’s arm to cut the Cane lead to 1.

Hamilton Wins It In OT

The Canes and Flyers are neck and neck right now for a wildcard spot so this game against a division rival was huge. All the players, coaches and Caniacs know the Canes record against Metro teams hasn’t been good so getting these 2 points was critical. Roddy seemed to use the fourth line more in the third than normal. McGinn’s grit and speed, whenever the puck went deep, was key to keeping the puck in the Flyers zone. Late in the period, two Canes got tangled just inside the blue line with both going down proving a grade A stance as Voracek had the puck and all the time in the world but the shot clanged off the crossbar.

Just under the 16-minute mark, Travis Sanheim took the puck behind the net with Foegs in tow. Ginner was checking his man behind the goal with Sanheim using those two as a pick then went around to the front left side and slid the puck in along the ice to tie the game. Roddy had Staal take the opening faceoff and if he won the faceoff, would go off to have Seabass take the first shift. Staal lost the faceoff with the Flyers methodically carrying the puck into the Canes end. Just as the second units got on the ice, Voracek once again hit the crossbar with Martin Necas getting the rebound passing to Seabass. Seabass calmly handled the puck up high in the Flyers end dropping off to Hamilton cruising by. The big man sped up a bit then realized he had a shot with his defender acting as a screen so he took a hard shot along the ice between both his defenders and Elliott’s legs for the OT winner at 1:56.

Big rumor during the game was Justin Williams signed a one year contract. Part of the rumor was Twitter but more so it was Willie was in the owner’s suite along with the owner and President, Don Waddell. After the game, the rumors were put to rest when it was officially announced Justin Williams is back. Good chance he’ll be in the lineup for Friday’s 7:30 PM game against Arizona. Be there!