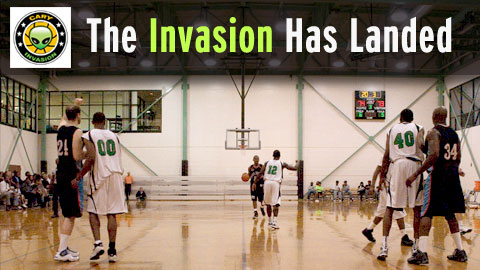 Cary, NC – With a green alien for a mascot, the Cary Invasion basketball team is preparing for its official tip-off on May 13 at Herb Young Community Center.As reported previously, downtown Cary will be hosting a new minor league basketball team, The Cary Invasion. After hosting tryouts last week, the team roster and schedule has just been announced.  The team, started by Mark Janas, is part of the Continental Basketball League and will compete against teams in Wilmington, Savannah, Fayetteville, and Birmingham.

Team members have been selected, and many hail from universities of the Triangle. “The Raleigh area is rich with former collegiate talent, and Coach Johnson has done an outstanding job identifying the right players to fit the ‘up tempo’ style of play that we believe will be successful in our CBL season,” says Invasion General Manager, Mark Janas.  “We’re especially pleased to have a roster loaded with names that will be familiar to many basketball fans in the area,” adds Janas.

Here’s who made the cut:

The team aims to capture the hearts of families in the area. Every home game has a theme and will offer discounted tickets to designated groups.

What We Feed Our Patients: The Hospital Food Revolution at Rex
Scroll to top
%d bloggers like this: