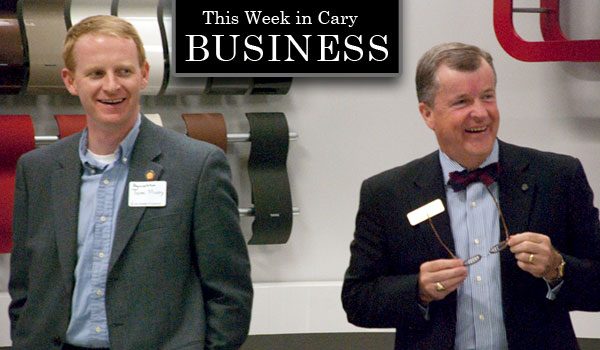 Cary, NC- Business is picking up steam in Cary and the surrounding Triangle. Here are a few news items and business events of interest to both entrepreneurs and titans of industry.

The Cary Innovation Center (CIC) is holding their Official Grand Opening and Ribbon-Cutting ceremony this Thursday at 10 AM.

The special guest will be Keith Crisco, North Carolina Secretary of Commerce. CIC welcomes the community to the ribbon cutting and invites the community to come in and take a tour of the facility. The aim of the center is to create successful entrepreneurs and small businesses and to become an economic engine for downtown Cary.

Kramden Institute, who we reported on recently (story), awarded their ten thousandth refurbished computer on Saturday, April 28 to a deserving student and his/her family at Carrboro Elementary School. The 10,000th computer is a historic milestone for Kramden, an organization founded in 2003 by Mark Dibner and his son Ned Dibner in the basement of their Durham home. They were honored at a ceremony in Carrboro over the weekend.

This non-profit organization is based in the southern part of RTP and accepts donated PCs which they refurbish and then give to kids around the state whose home lack access to computers and the internet.

“Our computers are the first step in providing students and their families with the digital tools they need to succeed in their academic and personal lives. Many of us take easy access to modern technology for granted, yet the fact remains that many North Carolinians, especially students, still face a struggle to obtain a personal computer,” said Kramden’s Executive Director, Michael Abensour.

On Thursday, May 10, the Cary Chamber of Commerce will host their annual small business awards at Embassy Suites.

The Chamber estimates we have about 3,000 small businesses in Cary, so winning one of the Chamber Excellence Awards is a big deal.

No word on the list of nominees, but we can tell you the name of one business that is in the running: CaryCitizen.

Tickets are still available for this lunchtime event.