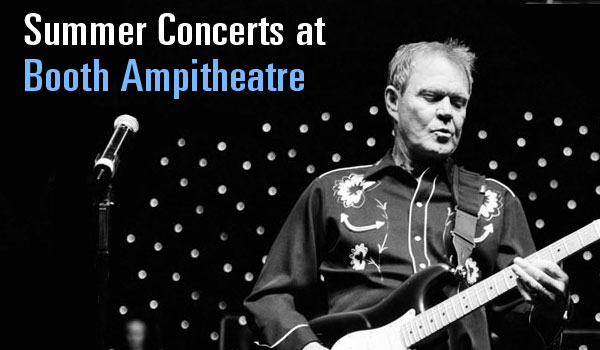 Cary, NC – I love Booth Ampitheatre in Cary. The atmosphere under the trees, the amazing sound quality and the variety of musical acts make this a town treasure. Here’s an update on what’s coming up for Cary concert-goers this summer.

Glen Campbell will bring his country melodies into Cary on the 21st of July. One of the biggest names in the Country Music world, the four-time Grammy winner and Country Music Hall of Famer has recently been diagnosed with Alzheimer’s and is on his Goodbye Tour. Take advantage of this chance to see this legend live.

Merle Haggard and Kris Kristofferson will be performing on the 7th of August. Haggard is another member of the Country Music Hall of Fame, and the duo is known for delivering a high energy show leaning towards a more modern side of country music.

Alan Jackson’s concert is on the 17th of August. An artist with 34 number one hits and a Grammy winner, Jackson is known for his smooth southern lyrics and has toured all across America and the world.

Performing Over 20 of ABBA’s Greatest Hits including Dancing Queen * Knowing Me Knowing You * Waterloo * Mamma Mia * Take A Chance On Me and many more! Not featuring the original ABBA singers but you would never know it! If you enjoyed Mamma Mia you should love ABBA The Concert!

Old Crow Medicine Show and The Lumineers come in the very next day, on the 18th of August. An up and coming band that puts a rock and roll attitude on their country songs, they are also known for a lively show.

For more information and tickets, go to BoothAmphitheatre.com.

You can also find things to do in every day Cary on the CaryCitizen Calendar of Events.

Just to get you in the right mood, here’s a clip of Old Crow Medicine Show doing a live version of Wagon Wheel. You can also see this video on YouTube.