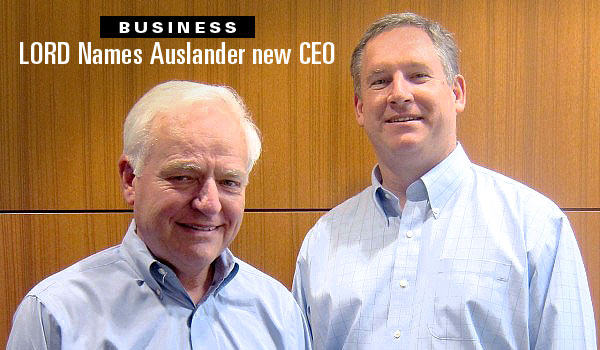 McNeel will remain as chairman of the LORD Board of Directors, where he will continue to provide leadership and support to LORD regarding its strategic plan and company direction.

Auslander began his career at LORD in 1984 as part of the student Co-op program. Over the past 28 years, he has held various managerial positions in the aerospace, industrial and chemical products groups, including two overseas assignments in France and England.

From our March 2010 story about LORD:

LORD was founded in 1924 in Erie, PA by Hugh C. Lord who had grown annoyed by the rattle of trains traveling near his home.

He vowed to come up with a solution to reduce the noise and he patented a vibration reduction system that was the beginning of LORD Corporation’s partnership with many aerospace and transportation companies. In addition to noise, motion and vibration control products and technologies, LORD manufactures coatings and adhesives that eliminate welds as well as alleviate heat in electronics.

These solutions are used in many high-end automotive models (Porche and Lexus, for instance) as well as aeronautics including the tilt-rotor Osprey aircraft.

Customers include the aerospace, defense, electronics and transportation industries. Local clients include John Deere and Caterpillar. LORD also has global operations, with significant regional presence through its strategically-located hubs in Brazil, Shanghai, Tokyo and the United Kingdom.

More than 2500 people are employed worldwide by this $700 million privately held company.

With headquarters in Cary, NC, approximately half of LORD’s business is from outside of the U.S.