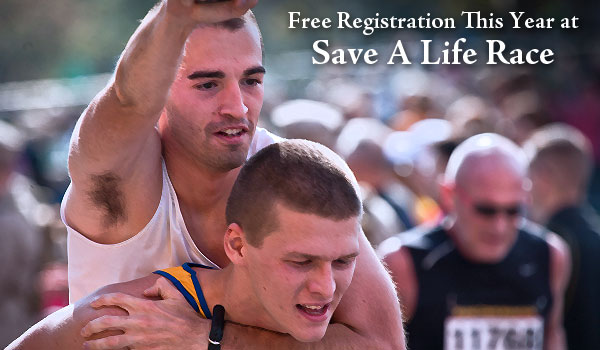 Cary, NC – In its third year, the annual Save A Life Race will be run with free registration to participants this year. The goal, says Victoria Bennis, event organizer, is to raise awareness more than money. The 2012 race takes place Saturday, September 22, at WakeMed Soccer Park.

Free Registration at Save A Life Race

A free race you ask? But how can that raise money?

Victoria said: We decided this year we wanted the event to be more about awareness and reaching out to teens, not about raising money. We will have Save A Life t-shirts for sale and a table for donations if someone wishes to do so. We have raised close to $14,000 to date.

Save A Life Raises Awareness

The concept for the race started in 2010  as a reaction to what had become an alarming statistic, in the previous year, 2 students from Green Hope High School had committed suicide, one of these teens was Victoria’s brother John.
Victoria partnered with Maryann Monaco to form Save A Life and together they decided to focus on three principles

With the determination that sometimes only the young can exhibit, Victoria vowed to make sure that her brother would not be forgotten, and that the lessons learned through his death would help to educate other teens against the dangers of  depression and feelings of hopelessness. Her message is clear- speak up so others can help you.

In 2010 the group held the first race at Green Hope High School which attracted over 300 participants. Last year the race location switched to WakeMed Soccer Park with its sanctioned 5K course.

This year Save A Life initiated a new program called Talk N’ Listen. Once a month teens can come to the Cary Senior Center and talk about anything and everything with other teens. The goal is for teens to be able to talk out both positive and negative feelings in an  environment free of judgement. Inevitably taking care of issues at hand before it builds up to being the worst thing In the world for them.