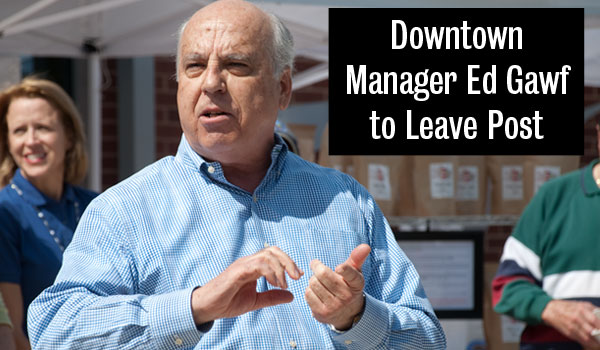 Story via Town of Cary email. Photo by Hal Goodtree.

Cary, NC – After two years on the job , Downtown Manager Ed Gawf is leaving his post at the end of May to spend more time with his grandchildren.

From Town of Cary via email:

Having succumbed to his love for and lure of nearby grandchildren, Town of Cary Downtown Manager Ed Gawf has decided to realign his work/life balance by leaving his fulltime role with the Town. His last day as Cary’s Downtown Manager will be May 31, and the Town has launched a national recruitment effort for his replacement.

“When I hired Ed just over two years ago, I did so knowing that his time with us would be limited, so we focused his efforts on kick-starting real and lasting change in our downtown, work we’re all very proud and appreciative of. While I wish we could have held on to him longer, there’s just no way we can compete with nearby grandchildren,” said Town Manager Ben Shivar.

Shivar added that as part of his stepping down as a Town employee, Gawf will continue serving Cary as a consultant. “A major part of our next steps in downtown will be our focus on private investment, and I’m hopeful that Ed will still be able to carve out some time to share his expertise with us ensuring continuity with a new downtown manager.”

Gawf was hired in 2011 as Cary’s first Downtown Manager and offered 40 years of experience in city planning, downtown revitalization and master planning, and land use regulations.

In his role as Cary’s Downtown Manager, he oversaw the preservation and repurposing of the James Jones House as well as The Cary, the Town’s first movie theater. He was essential in bringing the Mayton Inn to downtown Cary, and has increased coordination and communication between Town Hall, private interest groups and the Cary Chamber of Commerce.

“Good things are happening downtown, and I feel privileged to have been part of the effort,” said Gawf. “I look forward to continuing to work with the Town of Cary to transform the downtown into a vibrant, pedestrian-oriented center of our community.”

“He accomplished a lot downtown, got the ball moving after years of inertia,” Goodtree continued. “More than anything, I think we’ll miss his willingness to challenge expectations.”

“I’m sorry to see him go,” said Doc Thorne, President of the Heart of Cary Association.”Ed did a lot to change Downtown Cary.”

Until Gawf’s successor is secured, Assistant Town Manager Mike Bajorek will step in as the point of contact.

Business: A New Generation of Customers is Here