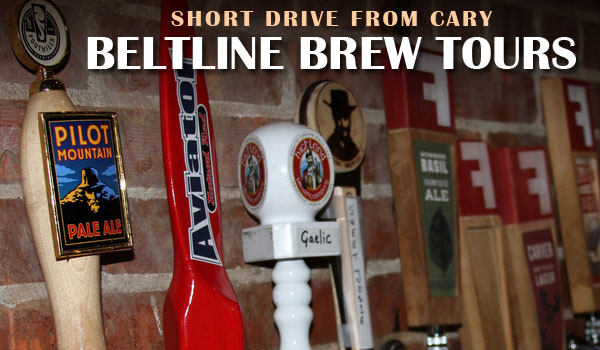 Cary, NC – A brilliant idea a long time coming, in my mind anyway. Beltline Brew Tours visits breweries across the Triangle in a private bus. I took the newest tour of the Triangle’s hippest food destination – Durham.

Will Holland, a fellow home brewer, beer lover and localista is trying to get Triangle-ites to experience the local craft beers that we have to offer. Asheville, NC calls itself “Beer City”, but the Triangle is becoming a worthy rival for that title.

Will is trying to promote his Beltline Brew Tours foray into Durham.

“My experience is that people from Cary don’t travel into Durham much, except for the occasional event or for a Bulls game. There is a vibrant micro-brew culture evolving there,” Will told us.

We met Saturday at Bull City Burger and Brewery at 11 am for a well-delivered briefing on tasting and brewing beer there. We boarded a nicely appointed coach with about 20 other folks with “Wes” at the wheel about 30 minutes later.

We headed to the avant-garde yet growing Triangle Brewing Company in an old Durham neighborhood where we were greeted by Rick and Andy, the owners. We were welcome to drink all the beer we wanted to try. Talking to the staff – their passion for beer was obvious (as was their irreverent sense of humor – I LIKE IT).

CaryCitizen featured Triangle Brewing Company for its venture into canned craft beers some time ago. Canning micro-beers was once thought to be a sin.

Their motto is “No Bull Just Beer”, which in itself is bull. But the beer is good.

Their IPA is killer and they made a raspberry porter that I was forced to try by the staff. “Gross”, I said. They insisted. It was amazing.

Eyes wide open now, and the tour group strangers now starting to mingle, we headed to our next stop – Fullsteam Brewery.

We walked into what seemed to be an old-warehouse-turned-brewery after passing by people standing and talking and eating lunch on the sidewalk outside the brewery. As we entered we pass by a birthday being celebrated inside the brewery with cake and beer and party hats. There was a lot going on here.

One of the staff walked up with a delicious cloudy Saison in juice glasses for us to try as Sean Lilly Wilson, the owner (on his business card – “Chief Executive Optimist”) took us into the brewery. We tried several beers while he talked about their sourcing of ingredients – ALL local.  Sean is a beer hero to many in the local suds biz.  He holds both an MBA and Master of Public Policy from Duke University.

In both 2012 and 2011, Sean was a James Beard Foundation semi-finalist in the category of Outstanding Wine, Beer, or Spirits Professional. He founded and led both Pop the Cap and Permit Beer, two beer lobbying organizations that have opened up economic markets to North Carolina’s craft beer industry.

Back to Bull City Burger and Brewery

We ended the tour back where we started about 3 hours earlier, to taste the delicious amber wares at Bull City. Equally impressive were their incredible burgers!

The tour ended at about 4 pm.

Will also offers regularly scheduled tours of Raleigh breweries and a new tour of South Wake County breweries. I’m planning on trying them all.

All in all, we had a great time with no worries about driving after imbibing (we had a DD both ways) with Wes our “steerologist”. Will was there with us to answer all of our questions. The breweries were ready for us with no waiting. We even learned something.

Cary’s Summit on the Future