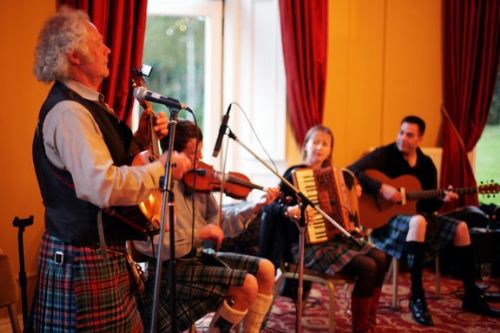 Cary, NC- Have you been in the new Cary Theater yet?  If you haven’t, here’s a great opportunity. Sister Cities of Cary along with the Town of Cary is presenting a Ceilidh at The Cary on March 22, 2014.

According to Wikipedia: “In modern usage, a céilidh or ceilidh /ˈkeɪlɪ/ is a traditional Gaelic social gathering, which usually involves playing Gaelic folk music and dancing. It originated from Ireland and Scotland, but is now common throughout the Irish and Scottish diasporas. In Irish it is spelled céilí (Irish pronunciation: [ˈceːlʲiː]) and in Scottish Gaelic it is spelled cèilidh (Scottish Gaelic pronunciation: [ˈkʲʰeːli]).“

Why a Ceilidh in Cary?

We have quite a rich Scottish / Irish culture here.  The number of Irish pubs (4 that we count) is an indicator of local interest in Celtic food and culture.  Some of the pubs even have nights featuring Celtic music.  Cary is also the home to both Scottish and Irish dance schools and a number of groups who play Celtic music, so we have a ready supply of local talent to draw upon.

As well, immigrants from Scotland and Ireland were among the earliest European colonists in the State. Their music forms a continuum with native bluegrass traditions today.

New Twists to the Tradition

The Ceilidh at The Cary will add a few new twists to the traditional Ceilidh.

Expect to see and hear bagpipers from the NCSU Pipe and Drum corps, students from the Annandale School of Scottish Dance, and local Scottish and Irish music groups including “Home to Kilarney” among others.

Tickets are $5 and $10  in advance for this show. Purchase at the Cary Arts Center Box Office or at eTix. The theater only seats 165, so get your tickets now!

Article by Barbara Shepard, current president of the Sister Cities Association of Cary