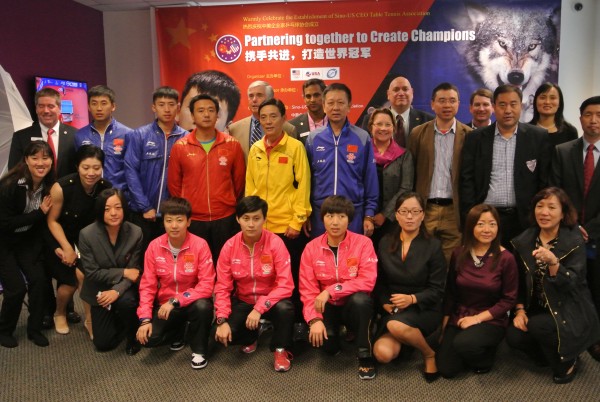 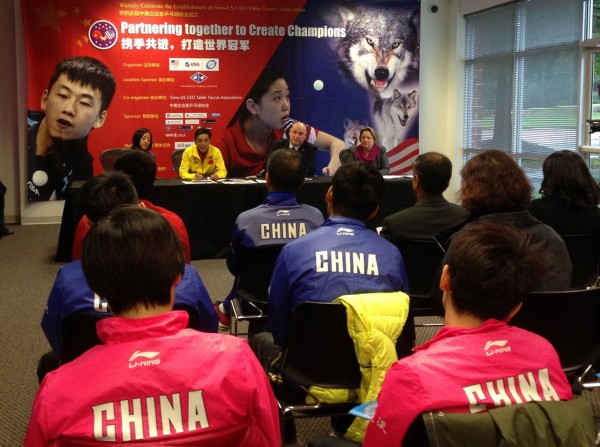 Recalling Diplomacy of 40 Years Ago

At 2:00 the group held a press conference at their Perimeter Park facility.

Mike Babuin, Chairman of the Board of USA Table Tennis said, “About 40 years ago table tennis broke the ice between our two nations”.

This meeting in Morrisville was the first time ever that the Chinese Team has come to North Carolina, and many are hoping it won’t be the last. Triangle Table Tennis is hoping to form a strong bond with the Chinese Team to continue learning from each other.

The organization, headed by Ann Campbell and Mike Babuin, has many ties to China, one of which is their Head Coach, Ms Tong Feiming, a past member of the Chinese National Team who competed in the Olympics for China.

The Chinese delegation expressed pleasure over the quality of the facilities at Triangle Table Tennis. The facility boasts Olympic style courts and amenities as written about in a previous CaryCitizen story. Lu Yuansheng, the Vice Chairman of Chinese table Tennis Association stated that he was

“Glad to see under the leadership of your association (TTA) a USA player to win the first ever bronze medal” he went on to add “I hope the friendship between our two peoples can continue forever”.

The group came to the Triangle to help athletes, and aspiring youth, develop proper training techniques and skills to improve the quality of their performance. After the news conference a clinic was held in the evening for beginners through intermediate players and a second clinic was offered the following day for advanced table tennis players. The groups then offered private lessons in two sessions on Friday September 26 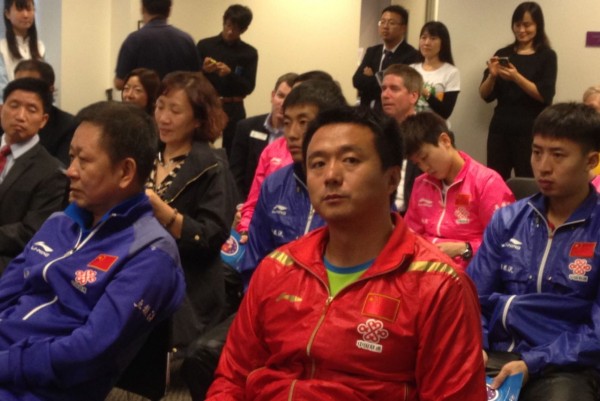 The athletes and audience at the press conference

The Association brought over a delegation of five athletes to visit the center in Morrisville including: Mu Zi (winner in 2007 and runner up in 2009 for the Mixed Doubles World Championships) , Wen Jia (2013 singles and doubles champion at the German Open) , Feng Yalan (in 2012 the Women’s singles champion in Russia and in 2013 a quarter finalist at the China Open), Fang Bo (who has won  championships in Austria and Russia) and Wu Hao (in 2014 was declared the China Super League “superstar”) .

They came with two of their coaches: Ren Guoliang the Chines Women’s Team Coach and Ma Junfeng, the Chinese Men’s Team Coach, both reknowned in their country for coaching not only the National Team, but also individual athletes who have gone on to place as high as third in the World Championships.

Community leaders and corporate entities will be sponsored much of the activities associated with this rare event. The Chinese delegation hopes to increase awareness on the lifelong physical benefits of table tennis for youth and adults. In addition, they hope to help launch a training program for local area youth that will be designed to train and nurture young table tennis talent.

New Park to be Named for Jack Smith