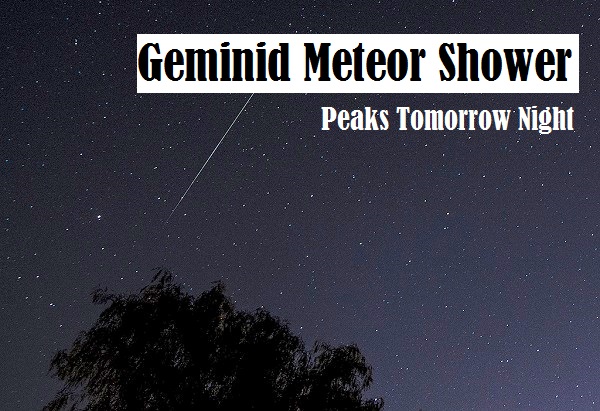 Cary, NC — The Geminid meteor shower, one of the most active meteor showers of the year, is set to peak tomorrow night, December 13, 2014, with great viewing conditions present right here in North Carolina.

Great Views for the East

According to NASA, the 2014 Geminid meteor shower is forecast to be one of the most lively showers of the year with great views in the skies over Earth. This week was a good window for Geminid-watching, but late tomorrow night into the predawn hours of Sunday morning will be the best time for stargazers to catch the action.

AccuWeather.com Meteorologist Andy Mussoline explains that a high pressure system sitting across the region is causing clear skies in many areas–creating some of the best viewing conditions right here in the East. 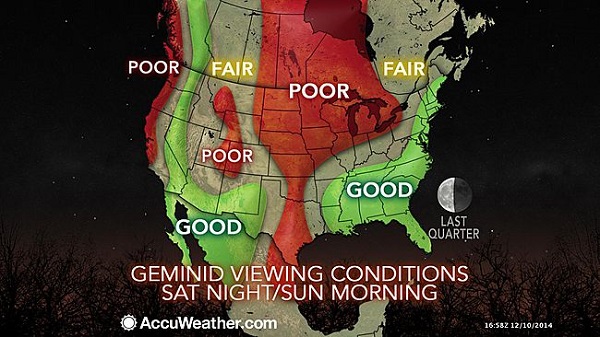 According to AccuWeather.com, the East and the Southwest will have the clearest skies for stargazers.

The Geminid meteor shower is named after the constellation Gemini (where these meteors appear to radiate from). Meteor enthusiasts know the Geminids to be the most active of the meteor showers–their source comes from an asteroid rather than a comet and produces a grittier steam of debris with more colorful meteors of yellow and green.

Meteors may be visible as soon as it gets dark tomorrow evening, but their activity will increase starting at 7 pm and continue until the light from the moon peaks at midnight.

Dark skies, away from city lights, are best for viewing meteor showers. During evening hours, city gazers can expect to see 10-20 Geminids per hour, and people in rural areas can look for 30-40.

Despite its proximity to the Triangle, Jordan Lake is predicted to be an excellent spot for meteor viewing. To encourage stargazing, the Morehead Planetarium and Science Center is hosting a sky watching session at Jordan Lake from 8-10 pm tomorrow night. Morehead educators and local astronomers will be on hand to answer questions and share their telescopes.

Dress warmly–temperatures are predicted to drop into the 30s after sunset.

Garden: Holiday Plants for Your Home