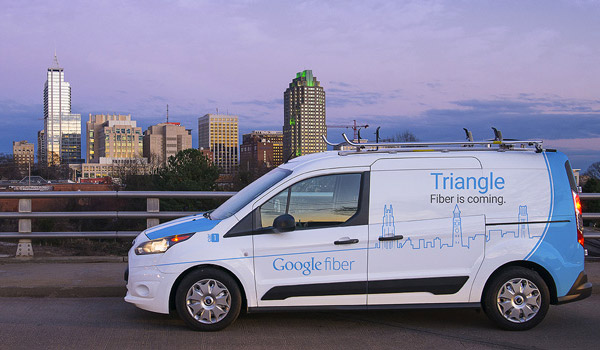 Cary, NC – What would you do if your internet were 100 faster? Start thinking about that question, because Google has chosen the Triangle for its next rollout of Google Fiber and Cary is on the list to get gigabit internet.

The Mountain View, California tech giant announced today that the Triangle was among four metropolitan areas selected for the next rollout of Google Fiber. Other metros chosen include Charlotte, Atlanta and Nashville. Google already has Fiber up and running in Kansas City, Provo and Austin.

Cities not selected in this round include Phoenix, Portland, Salt Lake City, San Antonio and San Jose.

Here are the Triangle communities Google has designated for Fiber:

Other Triangle communities including Apex and Wake Forest will have to wait or hope for better offerings from current providers.

What Is Google Fiber?

Google Fiber delivers 1 gigabit internet to the home. That’s about 100 times faster than the 10 megabits most broadband customers in the U.S. currently enjoy.

Google has not announced a timetable for Triangle rollout, but you can sign up for announcements right now:

From previous Fiber rollouts, expect the Triangle network to grow street by street, neighborhood by neighborhood. Your friend may get it in a few months but you might have to wait two years.

Stay tuned to this space for more on the Cary rollout of Google Fiber.