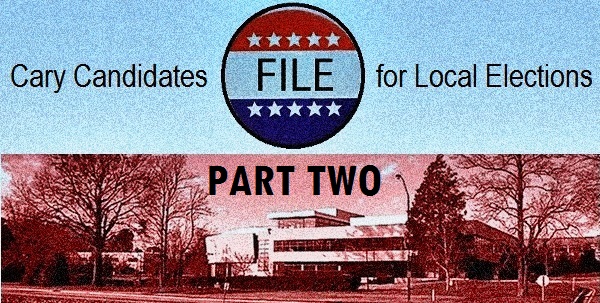 Cary, NC — The filing period for the Fall 2015 municipal elections closed on Friday, July 17, 2015 for Wake County. Since Part 1 of this story, several new candidates have filed to run in the upcoming elections. This is the complete list for Cary.

On October 6, 2015, citizens will be able to vote for individuals to fill four open seats in Cary’s government. Though voting doesn’t begin until fall, filing began Monday, July 6, 2015 and ended on Friday, July 17, 2015. Both Cary incumbents and new candidates filed to fill the open seats.

Cary Mayor Harold Weinbrecht and Town Council Members Don Frantz and Lori Bush have all declared their intentions to run for re-election to their current seats. Of these incumbents, only District B representative Don Frantz will face opponents in the October election.

Cary residents Nancy Caggia and Ken George filed first to fill the vacant District D seat and were shortly followed by new opponents Maria Cervania and Gray Rinehart. This seat was formerly held by Gale Adcock, who vacated her Town Council seat after she was elected to the N.C. House of Representatives last year. The seat represents central and western Cary.

Four seats are up for election in Cary this fall, including the:

In a few weeks, we’ll send out our CaryCitizen Candidate Questionnaires to each of the candidates. With these questionnaires, each participating candidate will have a chance to answer the same three questions in their own words. As we receive the completed questionnaires, we’ll publish them individually, just as they come to us, without any edits.

The result is a series of non-biased profiles that can help you learn about each candidate.

Town of Cary municipal elections will be held on October 6, 2015. For more information on registering to vote and voting locations, visit WakeGov.com.