Cary, NC — Weather forecasts are calling for a possibility of snow late Wednesday afternoon and again over the weekend.

We’ve seen two beautiful displays of large, white snowflakes falling from the sky two times this month already – neither flurry stuck around for more than half an hour, but perhaps we’ll have a big snow that sticks later this winter.

Will we see snow again in Cary this week?

Probably, weather channels are saying, but it won’t stick around. There’s a very good chance that the Triangle will see snow flurries by tonight and again on Friday evening and Saturday morning. WRAL reported that, “A large winter weather system will work its way east into North Carolina on Wednesday, which could start dropping snow in the mountains around 2 pm.”

As the system moves its way toward the coast, though, the amount of precipitation will decrease. 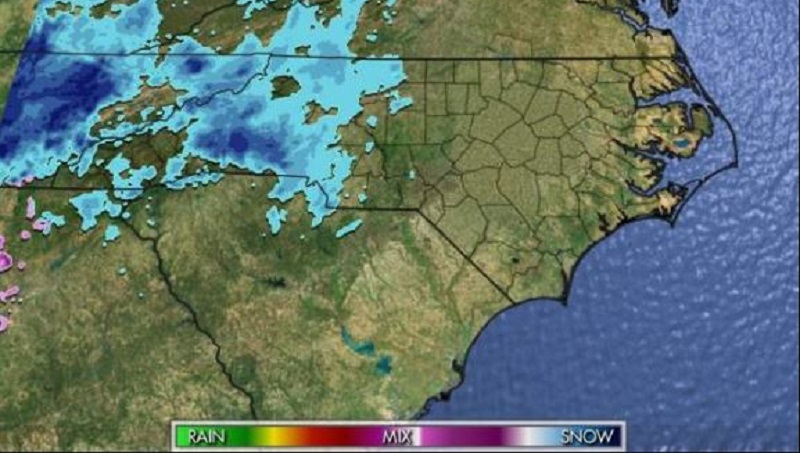 According to WRAL meteorologist Elizabeth Gardener, snow could start falling in our area late Wednesday afternoon (around 4 pm or later). If snow accumulates in Cary, it will be very light, though the cold weather we’re seeing could help some of the snow stick around. “With these cold temperatures, it wouldn’t take much to cause some slick conditions on the roads,” Gardner said. If it snows today, we won’t need to worry about school closings or snow accumulation, but Triangle drivers should be extra careful during their evening commutes tonight.

Right now, we’re also hearing that snow will return this weekend, bringing with it an unwanted visitor of freezing rain. “A more potent storm will advance into eastern North Carolina on Friday that could bring a mix of snow and rain,” WRAL shares.

Right now, the forecast predicts that sleet and freezing rain could start falling on 7 am Friday and continue until lunchtime. As it warms up Friday afternoon, the precipitation could turn to rain. Then, that rain could turn to snow flurries on Saturday morning. Highs could creep up above freezing, but not by much, so we’ll see what happens.

Stay warm, Cary! And, just in case we get enough snow for snowcream, here’s our recipe.