Cary, NC – Just as every elected leader gives a yearly assessment of their community, Cary Mayor Harold Weinbrecht gave his State of the Town address on Wednesday to the Cary Chamber of Commerce. While optimistic, he laid out the challenges that will undo the Cary way of life if not acted upon now. 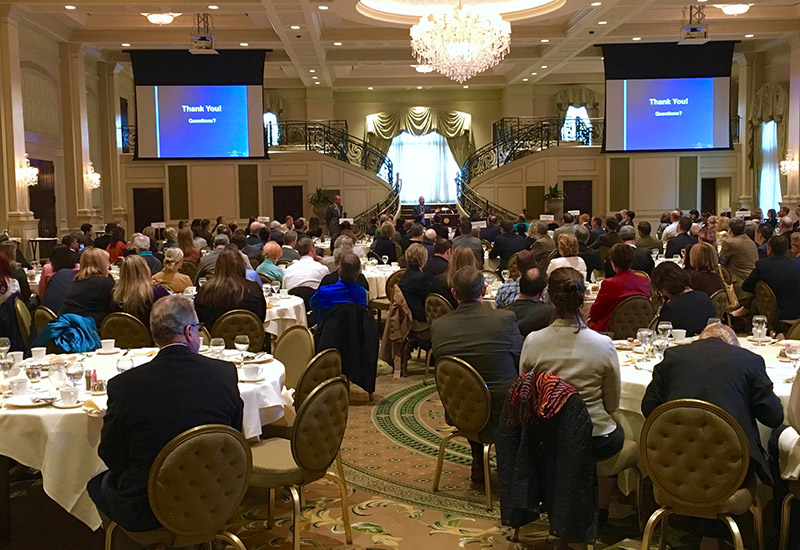 What Work Needs To Be Done

Weinbrecht started his talk at the Cary Chamber of Commerce meeting on Wednesday, January 25, 2017 by going through the many advantages Cary has. Among those are:

He also listed the town’s recent accolades, from the Gold Award for the Parks, Recreation and Cultural Resources Department, to our listing as the safest town in America. As far as Cary’s assets, Weinbrecht listed two new hires: Town Clerk Virginia Johnson, whom Weinbrecht described as the “glue that holds council together,” and Town Manager Sean Stegall.

It is through Stegall’s assessments that Weinbrecht said they have started to rethink their approach to Cary’s future.

“He said ’10 years from now, if we are what we are now, would you be happy?’ and I have to say no, not really,” Weinbrecht said.

Stegall, and Weinbrecht, said Cary could be like Sears or Blackberry – once vibrant companies at the top of their industry turned into relics of the past. Now, the challenge is not only to preserve Cary’s quality but to plan for the next stage.

“That sounds scary but I can’t think of a community better suited for that than Cary,” Weinbrecht said.

Part of that involves investing in infrastructure, which Weinbrecht said would lead to more problems down the road if avoided, and finding ways to grow Cary’s economy. For growth, Weinbrecht encouraged public-private partnerships, support for small businesses and leveraging technology.

“I think technology is probably our most underutilized resource,” he said.

Other parts of development include the Eastern Gateway plan and the Cary Community Plan, both of which have been recently approved. While the Cary Community Plan includes a broad outline for how the town should operate, Weinbrecht talked more specifics in the Eastern Gateway: it will be major mixed use with a focus on office space, as well as two potential anchors with current bids for Wegmans and “Project Emerald” which Weinbrecht did not name.

Also, as part of the development of downtown, Weinbrecht listed the new businesses coming in and mentioned plans for more office and residential space to bolster the region.

Weinbrecht did not ignore the problems Cary will face as it tries to develop and become the town it wants to be in the future. Along with those demographics Weinbrecht listed at the beginning of his talk, he added that Cary has an aging population.

“That’s a trend we need to prepare for and a trend we probably need to turn around,” he said, urging for policies to encourage more young people and specifically “millennials” to move to Cary.

But when it comes to obstacles to growing the economy, Weinbrecht specifically mentioned HB2 and how it affects the perception of Cary.

“If you ask someone in Silicon Valley or New York City, they’ll say Cary is a small town outside Raleigh in a state that’s no longer progressive,” he said.

Weinbrecht said now the challenge will be to go out and talk to companies directly about Cary and rebrand the town.

“We need to travel to those companies instead of waiting for them to come here,” he said.

Another problem associated with growth is the friction between urban environments and rural communities about the allotment of resources. Weinbrecht said anyone with connections to rural lawmakers should ask them to cooperate with suburban and urban governments.

“Our success is their success but that is a hard point to drive,” he said.

Opiods – 3 Deaths in Cary in 1 Weekend

Weinbrecht also addressed the outbreak of opioid addiction in Cary, with 100 deaths last year and three in January. He said the growth of the problem has been exponential but it has been “virtually unnoticed.” And he spoke to his own history knowing people with addictions.

“It destroys not only the person but everything around them,” he said.

Weinbrecht said he and Stegall are currently working on finding solutions for Cary’s opioid outbreak.

The Pain of Infrastructure Upgrades

And while not challenges or obstacles necessarily, Weinbrecht mentioned a few coming roadworks that will cause “headaches” as he put it, adding that he thinks the roads will be better afterwards.

Weinbrecht also brought up the slow progress of Google Fiber in the area, which still has projects in Cary.

“What they did in one year, we thought they would do in one month,” he said. 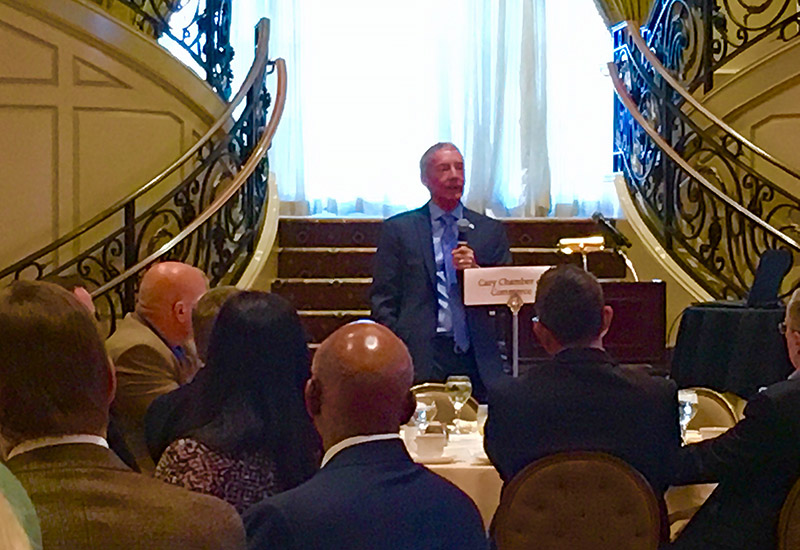