Cary, NC – Before coming to Cary and Sahlen’s Stadium at WakeMed Soccer Park, we were promised the new professional women’s soccer team would be dominant. And that was proved true again as they defeated the second ranked team in the league with a decisive victory.

The North Carolina Courage took on Sky Blue FC, based in New Jersey, on Wednesday, May 24, 2017. The Courage are currently ranked first in the league and Sky Blue was right behind them in second place. This past Sunday, May 21, 2017, the Courage lost to the third-ranked Chicago Red Stars so the crowd was eager to see what would happen here.

And to be expected with two top-level teams, the game started off tense, with the Courage building up their backline to stay competitive while taking any opportunity they found to attack.

This paid off in the 20th minute as Lynn Williams took a risk on a 2o-yard kick. It went into the back corner past Sky Blue’s Kailen Sheridan.

Sheridan got to show her skill as a goalkeeper roughly 13 minutes later as the Courage were looking at an open goal, with only Sheridan between the team and another point. But after a kick from North Carolina’s Jessica McDonald, Sheridan swatted it away and kept the game going.

Throughout the rest of the game, Sheridan made narrow saves for Sky Blue but a golden opportunity for the Courage helped put them over the hump in the 44th minute. A loose ball right in the box allowed Sam Mewis to run in and knock it into the goal, bringing the score up to 2-0.

Neither team was able to put another point on top of the pile after that and it ended in the Courage’s favor, giving the home team a big win. 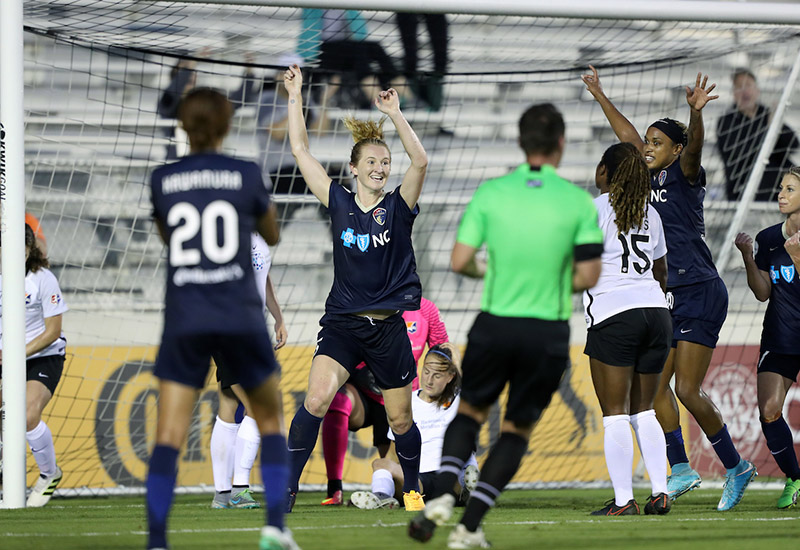 After back to back losses for the Courage, this was a much needed win, giving the team their fourth shut-out win in seven games. This was also Kate Rowland’s first time starting for the Courage, showing that the team has multiple talented goalkeepers.

Williams had her third goal of the season, making her the current leader for the Courage, re-establishing earlier observations that she will be a prominent player in the Spring season.

The Courage is maintaining its spot in the top of the league but now the Chicago Red Stars are second-ranked and they are one of the few teams to beat the Courage this season. What’s more, the Courage will be taking on the Red Stars on their home turf as the team hits the road on Saturday.

The next Courage home game is on Saturday, June 3, 2017 against FC Kansas City.