Cary, NC – The latest Cary Town Council meeting saw extensive discussion on the Weldon Ridge PDD Amendment to rearrange the position of schools and residential units, as well as a vote on the Sams-Jones House lease, funding for new sidewalks and more.

The item that took the most time at the Thursday, December 14, 2017 Cary Town Council meeting was a requested amendment to the Weldon Ridge PDD. Currently, this nearly 62-acre Planned Development District (PDD) between American Tobacco Trail and the Chatham County border line is zoned to include around 58 acres for a school or church with the rest zoned for residential units at a density of five units per acre, or around 46 units in total.

At the Public Hearing, fourteen residents came to speak out against the proposal. Concerns largely focused on traffic. The staff report pointed to seven intersections that would need improvements but residents said roads in the area need to be improved in general. There were also concerns about cars lining up to get in and out of the school, drivers cutting through the neighborhood to make it to the school and a perceived lack of parking spots that would result in people parking on the streets. 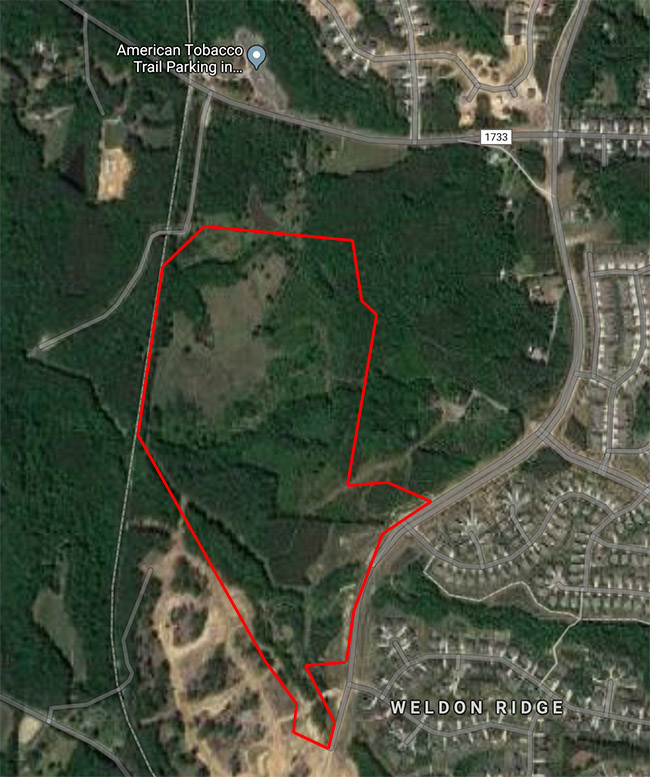 The approximate location of the Weldon Ridge PDD

Also, residents spoke out about the school itself. The proposal would bring in a charter school and residents said the intended charter would go to Cardinal Charter School, which had its quality criticized by several speakers. While Town Council cannot take the applicant or specific school into account in their decision, the school would only operate one bus and this increased concerns about traffic. Charter schools do not have the same bus requirements as traditional public schools.

Two representatives for the applicant also came to the Public Hearing. One of the representatives countered another critique by the residents who said there were already six schools in the area. The representatives pointed to how many of those schools are already capped and also said the new position in the amendment moves the school up the thoroughfare so it would have less impact on traffic. The other representative was a traffic engineer who pointed to the roads being built and improved in the area, including Morrisville Parkway, and said these changes would make things smoother if and when the school eventually came in.

Town Council largely said they had concerns about the size allotted for the school in this amendment but were interested in hearing more. Councilmember Jennifer Robinson, who represents this district, said she has seen traffic spillage at other schools so she is cautious about the same thing happening here.

“It’s one thing when you have that at schools that started 20 years ago. We should know better by now,” Robinson said.

The PDD amendment was sent to the Planning and Zoning Board for their recommendation.

There were three other Public Hearings on the Town Council’s agenda. One of these hearings was about amendments to Cary’s Land Development Ordinances (LDO), dealing with terminology in building heights and ground signs, as well as changes to streetscapes in the Carpenter Special Planning Area.

These streetscape changes saw the most discussion. The new rule would require 50-foot opaque streetscapes with indigenous plant species to give an organic appearance on the roads in this planning area. One speaker came out, representing Good Hope Baptist Church, which is on Good Hope Church Road. That road is affected by the streetscape change and the church representative said the increased buffer would impact future building projects.

Anna Readling with Cary’s Planning Department said there is flexibility in the plan for historic buildings to have more visibility and Good Hope Baptist Church is a historic site. However, anything new the church builds may not be covered by that allowance. Readling also said she would work with the church representative on finding a possible solution. The LDO amendment was sent to the Planning and Zoning Board for their recommendation.

Also on the agenda was a Public Hearing for rezoning 0.62 acres of land on Wilson Road and an IRS-required Public Hearing for SearStone to issue new bonds. The Wilson Road rezoning would see the residential land rezoned for minimum lot sizes of 7,000 square feet and require a right-of-way dedication and went to the Planning and Zoning Board with no discussion. Legal council to SearStone’s parent company spoke at their Public Hearing about the bond process and Town Council approved it unanimously.

Out of five applicants, town staff selected chef Michael Chuong and VVVC Inc. to be the new business at the historic Sams-Jones House in Downtown Cary. This would see a payment of $579,500 to the Town of Cary over the next ten years as part of the lease.

Other discussion items on Town Council’s agenda included funding for new sidewalks in Cary. Two of these sidewalks would be along Tryon Road near Ashville Avenue and along Ederlee Drive between Regency Parkway and Penny Road.

Included in this funding is design phases and easement acquisition for a sidewalk along NW Maynard Road connecting to the sidewalk west of Castalia Drive.

Town Council approved the funds unanimously but Cary Mayor Harold Weinbrecht said he is concerned that Cary is falling behind in sidewalk requests and wants the number of new sidewalks built to be “bumped up” in the next budgets.

The final item on the agenda was changes to LDOs related to commercial parking maximums, technical language in the Town of Cary and the placement of small cell towers. The only item that had the Planning and Zoning Board split 6-2 was the small cell tower item because it said they could not be added to street lights funded privately. The board members who voted against it were concerned sorting between private and public street lights would be an unnecessary work burden on town staff.

Councilmember Don Frantz had a similar concern but seemed to have those assuaged some by town staff clarifying that it would apply to street lights funded by the town versus those funded privately, so that may make it easier to differentiate. Town Council voted for the LDO amendments unanimously.

Public Speaks Out and Town Recognitions

Only one speaker came to Public Speaks Out and it was to compliment the town on the artist selection process for West Cary parks, support for condemnation of the Carpenter Fire Station Road Bridge (part of the meeting’s Consent Agenda) and to voice support for the Panther Creek greenway project.

Town Council started the meeting by recognizing the Employees of the Year. This year’s are Mary Beerman with the Planning Department and Charles Murray with the Cary Police Department.

Canes Win Streak At Three With 2-1 Win Over Blue Jackets
Scroll to top
%d bloggers like this: