Cary, NC – The North Carolina Courage continued their incredible undefeated run this past Saturday, May 12, 2018 with a win over the Washington Spirit, continuing their reign at the top of the league.

The North Carolina Courage’s match was their last at Sahlen’s Stadium at WakeMed Soccer Park until late June as the team goes on a lengthy tour. And they left the local fans in style as the Courage played a nail biter on Saturday.

The tide of the game was nearly decided in the opening minutes as the Courage’s Samantha Mewis got in great position thanks to a unique curving pass from Crystal Dunn. But as quickly as the two home team players got into position, Washington goalkeeper Aubrey Bledsoe was there a little bit faster and blocked the kick.

Bledsoe made one other very narrow block in the 37th minute as Dunn made it to the top of the box and hit a massive shot with her left foot. But Bledsoe dove to block it and deflected the shot by literally a fingertip.

The game remained scoreless for the entire first half, also thanks to Courage goalkeeper Katelyn Rowland in just her second start of the season. Rowland also blocked a free kick from the Spirit’s Tori Huster.

Finally, the Courage were able to break the tie in the 63rd minute. On a free kick, Jaelene Hinkle passed the ball to Abby Erceg, who got it into the left corner of the Washington goal. This brought the score up to 1-0, where it stayed until the end of gameplay.

With this most recent win, the Courage’s record is six wins and two draws this season with no losses, still making them the top ranked team in the league. This is also the fifth of eight games this season where the opposing team did not score on the Courage.

“I thought it was a really good performance,” said NC Courage Head Coach Paul Riley. “I thought we dominated the game. The midfield was very, very good, and I think having Sam [Mewis] back helps us a lot.”

In the upcoming tour of away games, the Courage will take on the third-ranked Orlando Pride as well as their rivals the Portland Thorns, who stopped the Courage from winning the playoffs last season.

The Courage return to play at home on Saturday, June 16, 2018 against the Utah Royals at 7 PM. 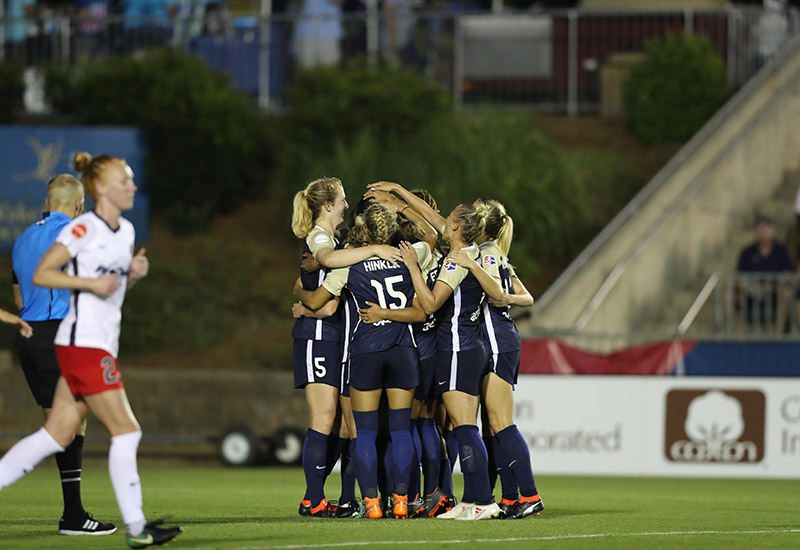