Cary, NC – Even with a weather delay that pushed the game to the next day, a record-size crowd still came out to see the NWSL Shield-winning North Carolina Courage play at home, defeating the Orlando Pride 3-0.

The North Carolina Courage’s game against the Orlando Pride was originally scheduled for Saturday, August 18, 2018 at Sahlen’s Stadium at WakeMed Soccer Park. But due to bad weather, the game was called in the 22nd minute when neither team had scored yet and was moved to Sunday morning, August 19, 2018.

The game resumed where it started off, giving the 7,606 spectators – a record for Courage games – 70 minutes to see their home team play. But they had to wait a while to see the Courage move ahead as there were several close calls but none that paid off. In the 44th minute, Lynn Williams hit a huge kick from outside the 18-yard box but with such a faraway kick, Orlando goalkeeper Ashlyn Harris was able to intercept and block it.

Debinha looked like she finally succeeded in the 55th minute but her goal was dismissed because Jessica McDonald was ruled offsides early on the rush.

But the fans’ patience was rewarded in the 75th minute as Williams put pressure on the Pride’s back line. This led to an own goal as Shelina Zadorsky deflected the ball, hitting both her and Harris until it went into their goal. This seemed to spur the Courage forward as they quickly scored a second point as Williams got the ball away from Orlando player Ali Krieger and passed it to Debinha, who kicked it into the left part of the goal.

“They started to have to open up the game, and I think when you give us a little bit of space and we got one goal, our momentum starts to go and go and go,” Williams said. “I think it’s hard to stop us.”

Then, in the 88th minute, the home team raised their score to 3-0 as Williams was back in the mix with a header into Orlando’s goal after a cross from Merritt Mathias. 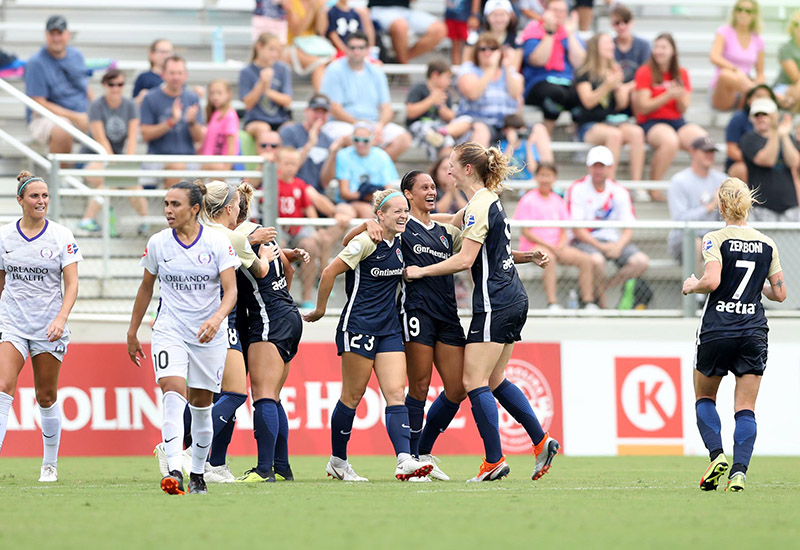 Courage Head Coach Paul Riley said he was pleased with the team’s performance on Sunday and chalked it up to their control of the flow of the game.

“I thought we controlled the game as soon as the whistle went this morning, the 70 minutes we had control of the game,” Riley said. “I just hoped we were going to get a goal. We missed quite a few chances. I think we limited them to really (just) set pieces, where they looked dangerous. So yeah, very pleased.”

With this win, the Courage’s record this season is 16 wins, five draws and one loss, giving them 53 points. With two regular season games left, the Courage could break the NWSL record of 55 points in one season. They are also four goals away from breaking the record for most goals scored in a season.

Their last home game of the regular season is on Saturday, September 8, 2018 against the Houston Dash at 7 PM.