For their past seven home games, NCFC have not lost so the pressure was on against the Tampa Bay Rowdies at the Saturday, September 1, 2018 game at Sahlen’s Stadium at WakeMed Soccer Park.

By the 23rd minute, the game was swinging in Tampa Bay’s favor as Sebastian Guenzatti got an assist from fellow Rowdy Junior Flemmings and scored a goal. Zack Steinberger, who stood out for NCFC at the Charlotte game, came close to tying the score a few minutes later but the defense pressured him to make a quick shot, which was blocked by Tampa Bay goalkeeper Daniel Vega.

Right around the halftime mark, Tampa Bay scored again, and again Guenzatti and Flemmings teamed together for the pass and score. This would not be Guenzatti’s final goal of the night as in the 56th minute, he got in another shot and extended the score to 3-0.

While NCFC out-shot Tampa Bay by more than double, they were unable to score a single goal and it ended with that 3-0 score.

After this loss against the Tampa Bay Rowdies, NCFC lost their first home game since June 9.

“I thought early on we dominated possession, moved [the ball] very well, created some chances,” said NCFC Coach Colin Clarke. “And then gave up a bad goal. From there, it was a struggle.”

Right now, there are eight regular season games for NCFC going forward and they are currently four points shy of a playoff spot.

The next home game is against Nashville SC at 5 PM on Saturday, September 8, 2018. This match is the same day as a North Carolina Courage game, that same day at 7:30 PM. 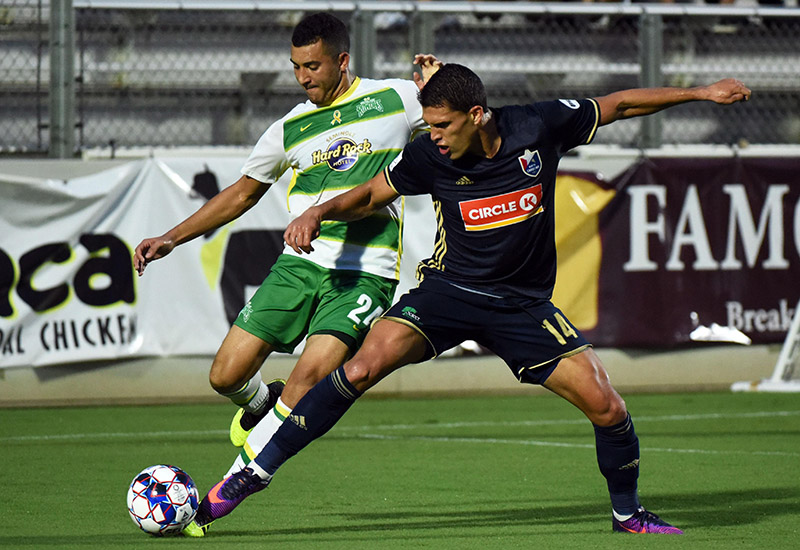