Cary, NC – After gas prices significantly dipped at the end of 2018, Cary drivers saw prices climb back up recently due to crude oil costs and refinery maintenance in the past weeks. However, now with cold weather slowing demand nationwide, local motorists will have a temporary break in prices going up.

Average gas prices in Cary and Wake County are significantly lower now than they were this same time last year: $2.447 per gallon in 2018 compared to $2.191 per gallon currently.

While gas prices dropped to their lowest points in the past two years at the end of 2018, those prices have been climbing back up. A month ago, the average gas price in Cary was $2.134 per gallon.

However, while it looked like gasoline would start to get more expensive, both as Winter ends and in response to smaller gas profits and revenues, prices have held steady. This is due to a sharp decline nationwide gas demand, down 425,000 barrels over the past week according to the Energy Information Administration.

This drop in gas demand is likely due to the massive Winter storms hitting much of the country currently. During these storms, there is much less driving, which keeps demand low. For Cary residents, drivers have gotten the best of the two deals, with no snow but still feeling the benefits of low gas demand through prices remaining steady. 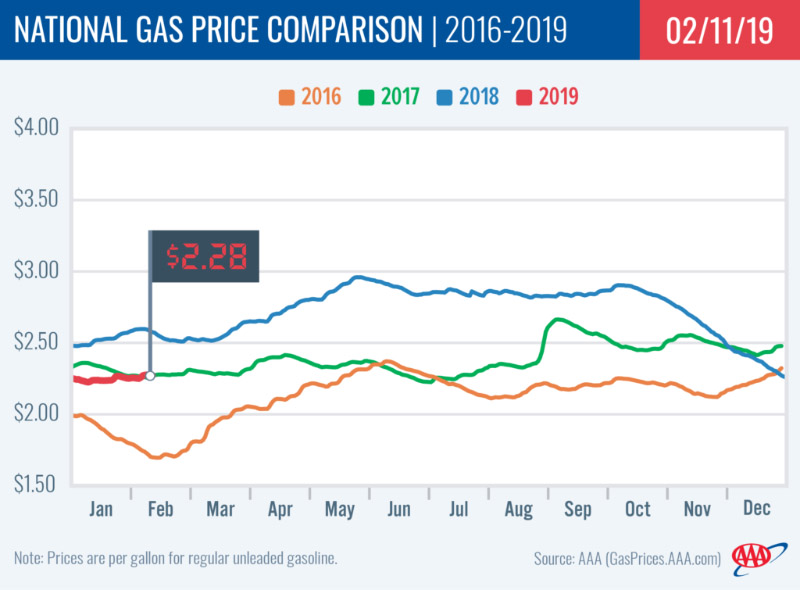 Why Were Prices Increasing?

The intense Winter weather much of the country is experiencing explains why prices have stopped rising but it does not explain why prices were climbing in the first place.

Crude oil is relatively cheap right now and that is increasing gasoline stocks. So even with Winter weather in the earlier part of the year reducing demand, Jeanette Casselano with AAA said this contributes to a price increase.

“[Crude oil prices], coupled with fluctuating gasoline stocks due to planned and unplanned maintenance at refineries as well as instability in demand, likely due to frigid temperatures, are all contributing toward movement at retail pumps across the country,” Casselano said.

There is also still uncertainty over whether the Organization of the Petroleum Exporting Countries (OPEC) will reduce supply in order to increase gasoline prices. Also, new United States-sanctions on Venezuela could reduce oil supply further, which would also increase prices. Questions such as these have kept the gasoline market fluctuating.

To reduce gasoline costs in your personal life, consider using the GoTriangle and GoCary bus systems, as well as Cary’s extensive and growing network of greenways.