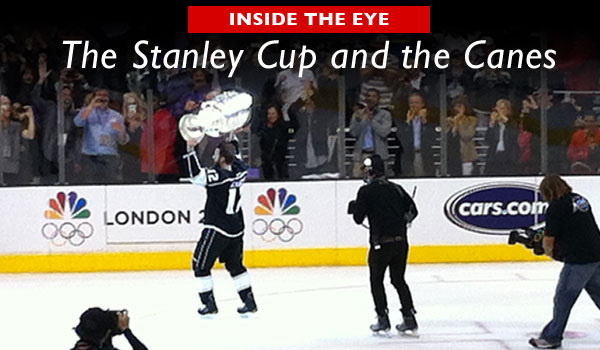 Cary-lina, NC – The L.A. Kings won the Stanley Cup taking game 6, by a score of 6-1 over the N.J. Devils after a very impressive playoff run. Here’s one Caniac’s perspective.

Overall the Kings ended with a playoff record of 16-4.  Amazing considering the Kings had to make a late season run just to get into the playoffs.  The eighth seeded Kings knocked off the #1, 2 and 3 seeds with seeming ease, racking up a 12-2 record.

Another surprising fact is the 6 goals they scored in the final game, was the first time all season they scored 6 goals.  Only the severely offensively weak Minnesota Wild scored fewer goals, 177, during the season than the Kings’ 194.

The Stanley Cup MVP, Jonathan Quick was as effective during the regular season as the Kings only had 179 goals scored against them for a +15 goal differential.  The Wild gave up 226 for a -49 differential.

The Canes, who finished just above the Wild, scored 213 while giving up 243 for a -30 goal differential.  Now we see why Jim Rutherford has 2 priorities during the off season: acquire a big, top 6 forward and a shut down type defenseman.

The series started off looking like the Kings would continue their dominance over everyone winning the first two games in New Jersey in overtime.  Back in LA they dominated in game 3 and it looked like this #8 seed would win the Cup going 16-2 in the playoffs.   With their spiked tails up against the wall, the Devils came out in game 4 with unbelievable energy.  If anyone watched games 4, 5 and 6, they saw some legal, and a few illegal and uncalled hits that were delivered like a tons of bricks.

I couldn’t help but think of how some Canes would have faired on the receiving end of some of those hits.   I could easily envision a few being sent into a new zip code.  Size isn’t everything but it certainly helps.  No question the Kings concentrated and shut down the scoring threats on the Devils.

Ilya Kovalchuk  and his $105 million contract, only had an empty net goal in the series.  Jeff Skinner is not a big player but is one of the most solid and swiftest skaters in the league.  No question he would have been a target but I honestly think he would have had a good series.  Kovalchuk has some great linemates which helps him score big goals.  The Skins and Finns, Tuomo Ruutu and Jussi Jokinen, were very good together.  All are skilled, Ruutu loves to hit (more so) and be hit (less so) and can score, Jokinen can hit, sometimes, can make great passes and can score.  Skinner started to hit last year but he should just finish his checks.  He gets paid to pass and score and is very good at both.  He can score while in the penalty box or on the injured list.

Back to the Cup…

Back to the Cup Finals:  New Jersey easily won game 4 sending the series back east.  Game 5 was all Devils.  It seriously looked like the Kings were a stride behind all game. While the score, 3-2 Devils, looked like it was a close game, it wasn’t.  One person asked me if the Kings wanted to win the Cup in front of the home crowd.  Of course they wanted to but they would have preferred to win it in game 5.  If they lost game 6, all bets were off for the Kings.

Game 6 was over in the first period.   When Steve Bernier got a 5 minute major for boarding, the Kings went on the attack.  Beside the time, 5 minutes for a major and 2 minutes for a minor penalty, the other huge difference is the team with the man advantage can score as many goals as they can before the penalized player can return.  In other words, they serve the entire 5 minutes.  Actually a substitute player serves the penalty and boarding also usually comes with a game misconduct penalty meaning the player is ejected, gets 10 minutes put on his penalty record and a ridiculously low $200 fine.   The Kings scored 3 goals during that power play and put the game on ice early.  That said, they continued to play with a vengeance and never let up.  By midway through the third period, you could see the Devils knew the game was out of reach.

The interview with Dustin Brown right after the game reminded me of Ray Whitney back in 2006 when the Canes won.  Whitney used the same adjective Brown did on national TV how “winning the Cup rocks”.

Tee shirts were made with Whitney raising the Cup with the phrase.

Congratulations to former Cane Justin Williams and the rest of the Kings on an amazing run on winning The Stanley Cup.
Here’s an interesting fact: hockey is the only sport in which the champions do not get paid a bonus.  It’s all for the ring and the pride of raising the Cup.

More on the Canes

The Canes will have a tough time getting the players they want during the off season.  Rick Nash is high on their list but he’s on at least 6 other teams’ list.  Zach Parise has indicated he will not sign with the NY Rangers and wants to stay in NJ.

It’s all talk for now as anything goes and money talks.

The salary cap for next season rises to over $70 million, up from $64 million.  The players’ union contract expires in September and I doubt there will be a major issue. I personally wish the cap would go down as $70m is putting all small market teams out of contention again.

Former coach Paul Maurice and goalie coach Tom Barrasso are going to Russia to coach in the KHL.  Good news is that should free the Canes of the balance of their contracts.  More money for players?

Friday June 22 is the NHL draft.  The Canes have 1 first round pick (8th), 2 second round picks, 1 third and 3 fourth round picks.  Then one in rounds 5,6 and 7. There is a Canes draft party open to the public.  Usually a player or two are there in a great atmosphere.  If you can make it, I’d highly recommend it.

Have a great off season and I’ll give updates as they happen.

Chamber: Business After Hours on Tuesday
Scroll to top