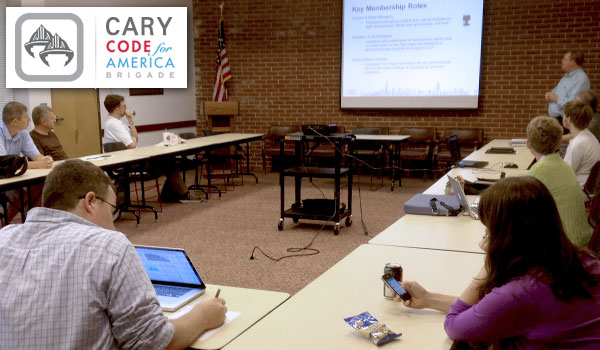 Cary, NC – Earlier this spring, a group of local technologists started a Cary branch of Code for America (CfA). The second meeting of Cary’s CfA brigade is on Tuesday, June, 25, 2013.

Code for America is dedicated to public service through code. Local brigades are assigned the task of reusing and repurposing existing technology for local governments.

Cary had its first Code for America last month at the Cary Chamber of Commerce. About a dozen technologists and community members showed up to hear more about the direction of CfA in Cary. Attendees included a recent graduate of NC State, a couple of IBMers, a former EPA scientific data manager and members of Cary’s Tech Task Force and ISAB.

In the Triangle, Raleigh, Durham and Morrisville have CfA brigades or other initiatives on programming for public good.

The meeting pivoted to a discussion of what Cary’s CfA Brigade could adopt as a project. The consensus opinion was to work on a mash-up of building permits with a Google Map.

In a nutshell, if you drive by a location under development, you’ll be able to look on a map and see what’s happening.

Cary’s brigade plans to develop the app for desktops, tablets and mobile phones.

You can find more info at Cary Brigade: June Meetup.