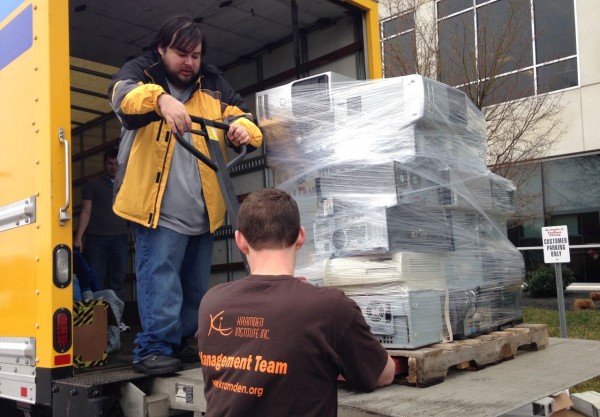 Morrisville, NC — Kramden Institute held an E-Cycling (that electronics) event Wednesday February 6, 2014 at the Lenovo headquarters in Morrisville that brought in a truckload of electronic gear to be refurbed by the non-profit group.Lenovo is a founding partner to Kramden Institute that refurbishes computers and then gives them to deserving youth in North Carolina. A recent expansion at Kramden, which Lenovo helped provide, created a Learning Lab at their headquarters which  now allows them to offer computer training classes to the computer recipients.

Cari Delmariani, of Kramden said the day started a little slow, due to the frigid temps and rainy conditions. But when CaryCitizen arrived the Hurricanes reception was pulling in dozens of cars and donations were brisk, easily filling a 30 foot delivery truck stationed outside of Lenovo Building 1 in Perimeter Park. 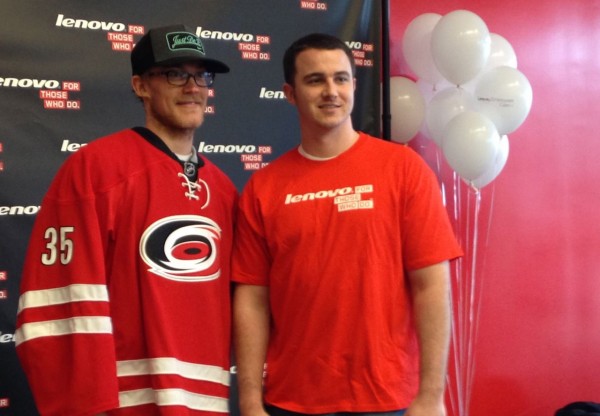 Wednesday to make the event a bigger draw, the Carolina Hurricanes community outreach staff brought along Canes goal tender Justin Peters for photo and autograph signing. The Hurricane hoopla started at 2, and included a special raffle of Canes gear for folks who donated, in addition to the photo op.

Computers from this event will eventually be donated to North Carolina military families in need of technology and training. Michael Abensour of Kramden added, “We are planning to do an award at a military base sometime later in the year, possibly at Camp Lejeune.”
Abensour remarked that “If donated computers meet the basic award specifications, they enter the refurbishing stream right away and end up in a student’s hands within one to two months. It varies quite a bit, obviously, but we try to turn a computer around pretty quickly as there is a huge demand for these machines.”

Lenovo has a three year partnership with the Hurricanes, so you could say this was a perfect storm, in which the three corporate partners were able to bring awareness for the event, and get some hockey fans to donate their used electronics the rubbing shoulders with their favorite team. News media was out in force. Besides CaryCitizen, WRAL and Fox 50 were shooting video and covering the event.

Jon Chase, Director of Community Relations for the Hurricanes, said that the team “throughout the season hosts community days which strive to take all the members of the team out to support these partnerships” . He added its their way of giving back to “a great community” and” we recognize the support we receive in the Triangle and North Carolina”. 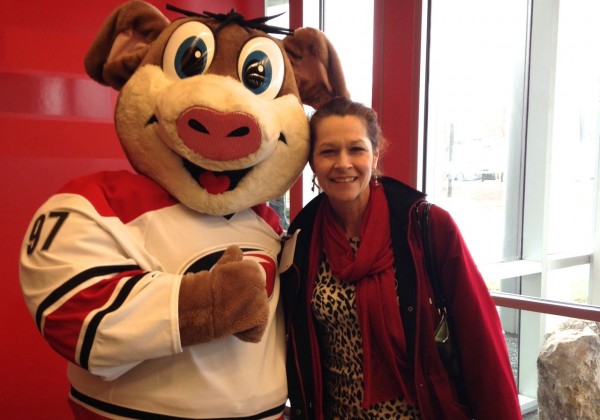