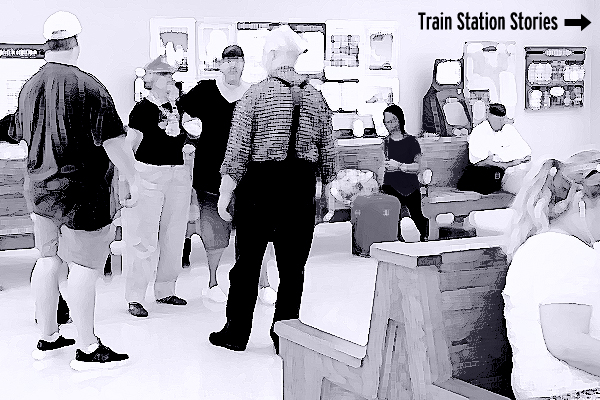 Cary, NC — Train stations are places to collect stories. I dropped in on my friend CoCo at the Koffee Kafe to catch up on some of the travelers’ tales at the Cary Depot.

Waiting in the Station

Sometimes, they wait in the station. And, when they wait, sometimes they talk.

They talk about where they’re going and where they have been. Sometimes they talk to CoCo. She has a thousand stories.

I was only there an hour, but I also managed to collect a few stories of my own.

“I really like when young girls and guys come over,” CoCo started to tell me when I first arrived at the station. “They’ll be quiet, but they’ll come over to buy something, and just a compliment on their hair or their shirt gets them to open up.”

In fact, a young man came up to order a coffee a minute later. He told CoCo that he was on his way to visit his mom for the first time in five years. “We haven’t talked much,” he said.

“I’m planning to surprise her, but I don’t know what it will be like.”

I Had to Get Away

Another day, CoCo met a woman who looked fine but needed help. She had been sitting in the station, eyeing the coffee booth for a while. Finally, she came up.

“I would like to get some water,” she said, and then she just started crying. The woman was in the process of making a big life change – she had just arrived in North Carolina and had moved here from Florida. “I had to get away,” she told CoCo.

Sometimes, CoCo exchanges email addresses or phone numbers with travelers so that they can stay in touch.

While I was visiting the station, I met a man who was traveling to DC.

“I’ve never taken a train before, so I thought what the heck?” he said. As we made small talk, I found out that his daughter is a navy pilot who had just come stateside for the first time in three years and he was on his way to see her.

He had visited her last November and told us about what it was like in the Middle East where she works. “It’s a different world there,” he said.

Of course, CoCo has “regulars,” too.

Local people will travel on Monday mornings to work out of town for a week. Other people come by, too, even if they aren’t traveling. I met Rahshee, who works at the gas station down the road and stops by the depot to grab a hot tea and say hi most days.

At the Cary train station, you never know who you’ll meet while traveling, or while standing perfectly still.

Story and photo by Jessica Patrick.