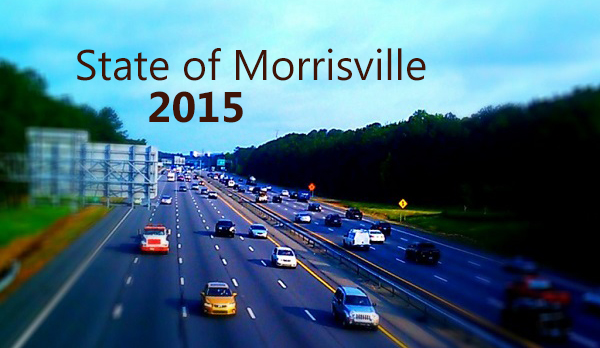 Morrisville, NC — On Tuesday, September 29, 2015, the Morrisville Chamber of Commerce hosted the State of Morrisville 2015, an informative talk and panel discussion about the town.

The Town of Morrisville has character – as “the heart of the Triangle,” it’s an incredibly diverse community in a business-oriented location near Research Triangle Park and RDU. Morrisville’s history is rich, too, as the town was home to the Battle of Morrisville in 1865 during the Civil War.

Morrisville is growing quickly – the current census is 23,699 residents, which is a dramatic increase from last year’s estimate of 20,753. In coordination with this growth, the Morrisville Chamber of Commerce hosted a talk to address town accomplishments, issues and plans.

Morrisville Mayor Mark Stohlman and Wake County Commissioner (District 3) Jessica Holmes were in attendance along with several council members and other town officials.

First, Mayor Mark Stohlman shared some of Morrisville’s accolades from 2015:

Next, Stohlman shared that Morrisville has made leaps in public safety initiatives this year.

Despite the town’s rapid growth, burglaries are down 8% and assaults are down 3%. This year, the town held its first-ever bike safety rodeo and youth fire safety camp.

With the help of Morrisville’s Parks & Recreation Department, the town is hosting new events and bettering its public parks and greenways. Morrisville’s first Spring Fest was a success as was the 150th Civil War Anniversary at Town Hall. Park and greenway updates included:

With growth comes traffic, and traffic congestion is the biggest issue in Morrisville. Mayor Stohlman shared with the crowd what is being done to address the issue.

Wake County Commissioner Jessica Holmes then shared “the state of Wake County” as it applies to Morrisville. Holmes discussed education and transit, but, first, she shared some interesting facts with us: 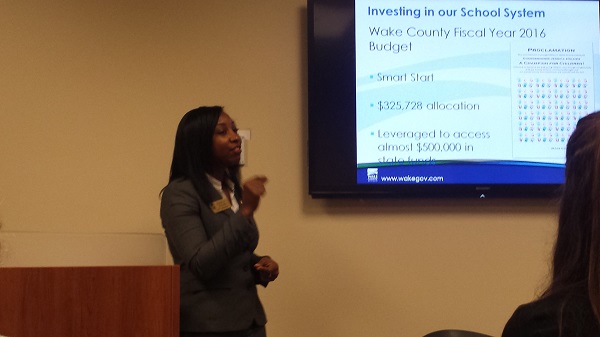 Holmes, who is an education law attorney, stated that there are 157,000 kids in the Wake County public school system. “Since more students are enrolled in our schools now than ever before, we just gave the school system the largest increase in Wake County’s history,” Holmes said.

Here’s what is being done to help kids and to address the need for more schools:

Right now, many Wake County roads are already above capacity.

If public transportation does not change by 2040, the traffic that is now a inconvenience will eventually decrease commuters’ quality of life. The county is working with many community groups to have one transit plan together by December of this year.

“We’re not only talking about transit, we’re moving forward on an actual plan,” Holmes said. “Public input has been received on four plans – and the plans are very people-driven.” The new plan will incorporate a mix of commuter rails (using existing tracks) and frequent bus service.

Bus stop shelters, transit accessibility and other conveniences are important to Holmes.

Keeping the user in mind is important, because even a transit plan that makes sense will not pay for itself if we don’t increase ridership. Light rail is out of the mix, and has been for a long time, because its cost is not practical. “Even though we like the idea of light rail, we’re pushing forward a plan we can afford that makes sense,” Holmes said.