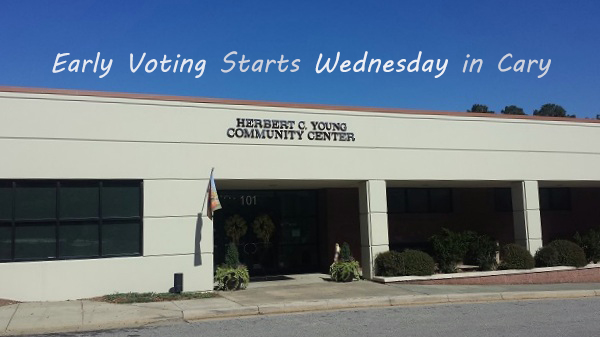 The runoff election for District D will occur on Tuesday, November 3, 2015, but early voting has already started in Raleigh and will start in Cary this week.

The October 6, 2015 election was a Town of Cary Municipal Election. Mayor Weinbrecht and Council Members Lori Bush and Don Frantz were all reelected, but the vacant District D seat was left undecided. This seat, which represents the southwest portion of Cary, was formerly held by Gale Adcock, who is now representing Cary in the North Carolina General Assembly.

This runoff election is for registered Cary voters who live in District D.

If you’re unsure of your district, use this Town of Cary resource to simply click the general location of your home on the map. Two tabs will pop up – one shows your November 3, 2015 polling place and another shows your district.

You can also use this resource from the NC Board of Elections to enter your name, date of birth and county to see your voter info, precinct and polling place location.

You will find a link to view your official sample ballot on that same page, too.

District D voters will vote for one of two candidates in the runoff. Below, find links to read their unedited answers to our three questions.

Early voting runs from Thursday, October 22, 2015 through Saturday, October 31, 2015. Any eligible Wake County voter can vote at any Wake County early voting location. Citizens who choose to vote on Election Day, November 3, may do so at their assigned precincts.

You can also vote early in Raleigh at the Board of Elections Office, 337 S. Salisbury Street in Downtown Raleigh. See the times and dates for Raleigh voting.