Cary, NC — Robby Robinson and Kevin Kendall wanted to know where they could go to hear local, live music on any given night – so they created Triangle Live Music, a website that tells its visitors just that.

Robby and Kevin are two Cary guys who love to go to local bars to hear live music from local bands. I met them at the Cary Doherty’s, one of their favorite hangouts, to talk about the website they started to help other music fans do the same.

Both men moved to the same Cary neighborhood in the late 90’s and soon became great friends over their shared interest for finding local bands to see each weekend. “We have completely different tastes in music, and we couldn’t be farther apart politically,” Robby laughed. “But one thing we both love to do is go see new bands and have a beverage or two.” 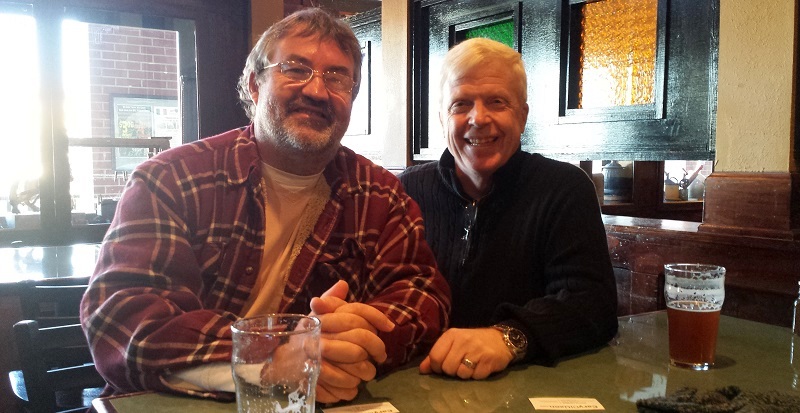 Kevin (left) and Robby (right) met me at Doherty’s, one of their favorite spots for local music.

“It started to be an every weekend kind of thing – we’d always wonder where the music was, and, unless you knew of a specific band or knew where the music was playing and went to that bar’s website, that was hard to find,” Kevin added. “Some websites listed mostly cover-charge, concert-type venues, but they’d only dabble in the no-cover bars – it was spotty at best.” Based off their own interests, and off of a need they saw in the music community, Robby and Kevin finally decided to build Triangle Live Music, a website that would list the smaller, local shows people want to know about.

Kevin built the site, and Robby started uploading all the gigs he could find. Triangle Live Music was born. “We started to realize just how many bars and venues are around here – it can be difficult to keep up with them,” Robby said.

We don’t get paid for doing this – it’s purely a labor of love.

The shows, bands and musicians listed on Triangle Live Music are easy to find – they’re all lined up in order by date and time, and users can use a navigation bar above the list to sort shows by Cary or by other cities and towns in the Triangle. 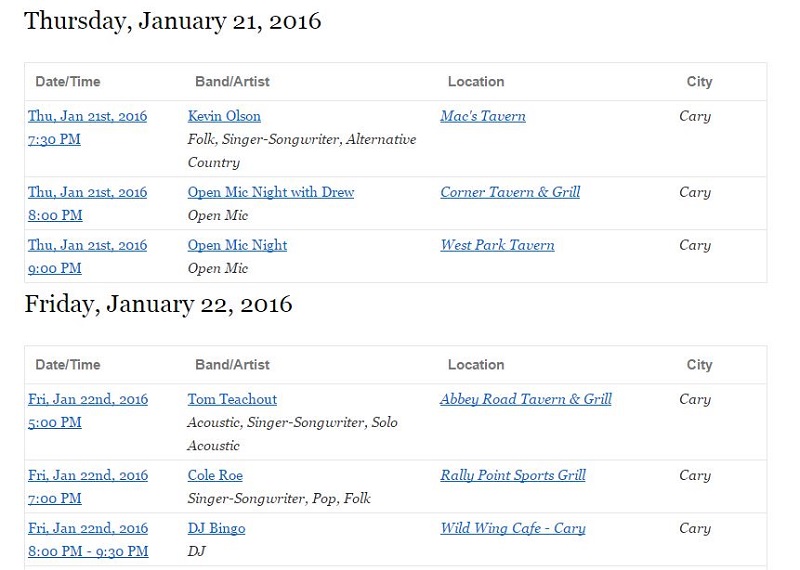 Shows in Apex, Carrboro, Chapel Hill, Durham, Garner, Holly Springs, Morrisville and Raleigh are all on the list too, but you can find at least 10 listings in Cary on most weekend nights. A total of more than 200 venues and 1,900 bands are listed on Triangle Live Music, and Kevin and Robby are constantly adding to that list.

“Even though Triangle Live Music focuses on no-cover shows, we just want to support local bands,” Robby explained. “Usually, if a band sends us their information about a paid concert or gig, we’ll add it to the list anyway.”

Gesturing to the fact that we were sitting in Doherty’s, Kevin added, “Here we are in a place that has live music at least three nights a week, but a lot of people don’t know about that or about all the open mic nights at The Corner, Abbey Road and other local places. We’re mostly just wanting to get the word out that this website is there for people to use.”

“We’ve found that there are over 1,900 bands in this area with an average of about 50 places paying for a band to play any one weekend, and a lot of them don’t advertise the shows at all,” Robby added.

Triangle Live Music is growing, and Robby and Kevin are happy at the amount of support they’ve received from the community. “We’re up to about 150,000 page hits a month,” Robby told me. “As of late, it’s not unusual for us to bump into someone out at a show that has used our website. A lot of the bands and bars are supportive, too, and send us their gigs.”

Even though Robby and Kevin are constantly searching to find gigs to add to the site, the easiest way for them to add content is for the community to send it to them. “Just send it to us – we’re happy to post whatever you have,” Kevin summarized. “We both have jobs, and people sending us stuff makes our lives easier.”

Send your date, time, location and band name to info@trianglelivemusic.com to be listed on the site. You can also find Triangle Live Music on Facebook for more news about what local gigs are happening nearby.

Story and photos by Jessica Patrick. Lead photo by The Corner Tavern & Grill in Cary.

Airbrush Spray Tanning – Get the Facts