Cary, NC – The latest Cary Town Council meeting saw an outpouring of public interest as Town Council discussed rezoning Cary Towne Center to potentially bring in an IKEA and there was a visit from our Town Crier.

After many months of speculation and interest, the rezoning case for Cary Towne Center had its first Public Hearing at the Thursday, August 24, 2017 Town Council meeting. There were some changes to the proposal since the first information meeting on Wednesday, March 1, 2017 including the number of buildings involved. This would be one, connected, 380,000-square foot building.

With any rezoning case, Town Council and the Planning and Zoning Board only looked at the land use and not any potential business that might come in. However, the rezoning to a Mixed Use District included many ordinances and conditions including a specific color and design scheme which lines up with IKEA’s signature blue and gold. In other words, if the rezoning passes but for some reason IKEA drops out, whoever develops on this property would also need to build a 380,000 square foot retail building with the same look and color scheme as an IKEA unless they rezone again.

The construction of the retailer would mean tearing down the Sears, Macy’s and part of the Food Court at Cary Towne Center currently. The maximum height CBL & Associates Properties, who own Cary Towne Center, are asking for is 60 feet, plus a two-level parking deck that would be shorter than the retail building. There would be a 150-foot setback to Ivy Lane as well as a fifty foot buffer between the Ivy Meadows neighborhood and new surface parking. The mall would agree to take care of the vegetation in the dividing berm.

A traffic study has identified seven spots around Cary Towne Center where intersections would need improvements, including widenings and changing or adding traffic lights. 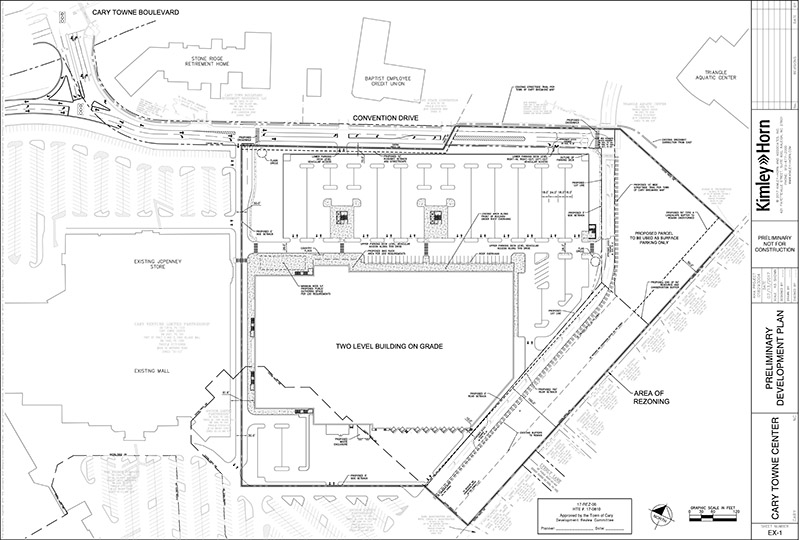 Ten people spoke at at the Public Hearing. Everyone appeared to be supportive and even those with concerns or criticisms sounded generally in favor of the project. Concerns included new traffic, noise from both construction and trucks unloading merchandise and light from the parking lot illumination. Many of the speakers with concerns also brought up improving the dividing wall at the top of the berm, possibly changing it from wood to a thicker material.

In response to concerns over noise and lights, town staff said decibel limits are still in place, as are light requirements although staff said the lights being installed would point down and there are no up-facing lights planned for the building itself. On the subject of noise, some Town Councilmembers said adding a thicker fence could impact the vegetation there.

“You might get a nice brick fence but then all the trees are gone,” said Councilmember Don Frantz.

Councilmember Jennifer Robinson asked for more information on the requests the developer are asking for to change Cary requirements, such as the number of sidewalks, not burying power lines, fewer foundation plants around the business, while also asking if whether the loading dock could face away from the nearby neighborhood. Also, Robinson asked if bringing in such a large retail building could negatively impact redeveloping the rest of the mall and asked for examples of IKEAs in mixed developments.

“I want to make sure in my fervor for IKEA, I don’t overlook changes to our ordinances,” Robinson said.

Cary Mayor Harold Weinbrecht also spoke directly to some residents’ concerns the construction and development would hurt their home prices by suggesting it would do the opposite.

“If you have property in this area, hold onto it,” Weinbrecht said.

The rezoning case now goes to the Planning and Zoning Board.

There was only one Discussion Item on the agenda for this Town Council meeting as Town Council voted for new bonds that would result in $30.1 million for transportation projects such as Green Level West and Carpenter Fire Station Road, as well as expanding Cary’s greenways and making improvements to fire stations in the area.

Also, Cary Finance Director Karen Mills said she had found an opportunity to refinance Cary’s general obligation bonds, saving the town $1.1 million over the next 11 years.

Town Council voted for all steps in this plan, including issuing the new bonds and approving the refinancing, unanimously.

The only other Public Hearing aside from the Cary Town Center case was a proposal to change the procedure around Land Development Ordinance (LDO) Amendments. This would put LDOs into five new categories based on the reasoning and type of ordinance.

This change, called for in the Imagine Cary plan, is intended to streamline these procedures. It would also create a specific lane for ordinances relating to special event centers and buildings for assembly use.

The changes were referred to the Planning and Zoning Board.

With Lazy Daze this Saturday and Sunday, August 26 and 27, 2017, it is a tradition for Town Crier John Webster to make an appearance to kick off the event. Webster spoke at the Town Council meeting and in addition to doing his usual crying, he shared a new book on the history of Markham, Ontario, Cary’s Canadian Sister City where Webster is from.

Webster also showed his trophy from the Muskoka Escapades of Town Crying Competition where he took first place.

There were only two speakers at the Public Speaks Out portion of the meeting. One was a Cary resident who spoke at the last Town Council meeting to say she has been harassed and surveilled and expressed frustration that Weinbrecht and Cary police have not contacted her about her case.

The other speaker was a local developer who asked about a change to a joint land use amendment dealing with density on property she was interested in.