Cary, NC – Until Amazon selects which finalist city will get its new headquarters, there will be constant studies speculating where the tech and retail giant will pick. A new study considers housing markets and quality of life for the company’s selection, putting the Triangle as the most likely location.

In a study published by ATTOM Data Solutions, a real estate data company, they analyzed 19 of the 20 finalists Amazon announced for its HQ2 campus based on their respective housing markets (Toronto was not included in the study). This included not only the median price of houses but also the quality of local schools, crime rates and general factors that related to quality of life.

The justification used by ATTOM for using this as a metric to predict where Amazon is looking is the similarity in median home prices throughout the finalists.

“It’s striking that 16 out of the 19 markets have median home prices that are lower than the city of Seattle, which our data shows was $585,000 at the end of Q4 2017,” said Daren Blomquist, senior vice president with ATTOM Data Solutions. “The only exceptions are Boston, Los Angeles and New York, indicating that Amazon is interested in markets that have relatively affordable housing for employees.”

The Triangle (which the study quantified as just “Raleigh” even though Cary, Durham, RTP and other nearby regions are also considered as part of Amazon’s plans) ranked #1 in housing market health in this study, with a median home price near the middle of the list at $235,000. Also near the middle of the pack was the Triangle’s price-to-income ratio and crime rate.

Some factors where the Triangle scored particularly well compared to the other finalists were its five-year home price appreciation (26 percent) and its average school score. Only Washington, D.C. and Montgomery County, Maryland did better in school rankings. The Triangle also had the fifth lowest effective property tax rate of any of the finalists.

In second and third place behind the Triangle are Atlanta and Pittsburgh respectively. 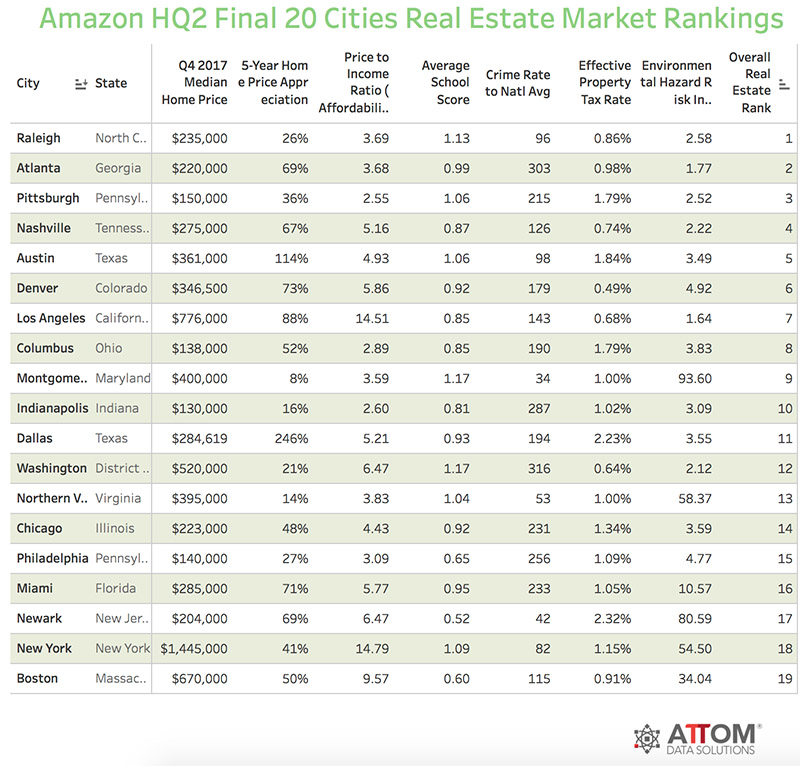 Other Factors to Consider

While this study looks promising for the local area’s chance for HQ2, this is the first study that has put the Triangle’s chances so high.

As Blomquist says in the study, the two factors he considers most important to Amazon are both housing availability and existing workforce.

In earlier reporting we did on HQ2 and where it may select, the Triangle ranked around in the middle of the pack when it came to tech workforce according to business researcher CBRE. Another study on tech jobs and Amazon job listings had the Triangle at the bottom of the list of likely candidates.

There is also the question of public transportation, which is a factor in housing and quality of life. Amazon has also cited this explicitly as an important factor in its selection and while Wake County voters passed a bond measure to invest in new transit programs and expansions, it’s unclear if that will be enough to entice Amazon when other finalist cities already have this infrastructure in place.

It is also worth pointing out that the ATTOM study put Boston at the bottom of its ranking when other projections have Boston as one of the top cities for HQ2, some even putting it at #1.

And aside from where Amazon selects for HQ2, the Research Triangle Park is currently being considered for a large customer center by Apple.

Guide to Summer Bike-Riding in Cary