Cary, NC – The latest Cary Town Council meeting had the first Public Hearing on this year’s Community Development Block Grant, as well as a rezoning adjacent to the Downtown Cary Park and the conveyance of Cary fire trucks to rural communities.

Note: Cary Mayor Harold Weinbrecht was not at this meeting, as he addressed in his latest blog post. Instead, the meeting was led by Mayor Pro Tem Lori Bush.

Of the two Public Hearings on the agenda, only one had any speakers come out. This was the Public Hearing for the Fiscal Year 2019-2020 Community Development Block Grant action plan, with funding from the Federal Department of Housing and Urban Development (HUD) providing a grant for programs related to housing, social services or local economic development.

The Town of Cary anticipates it will receive around $657,641 from HUD in this upcoming fiscal year, as that what the town received last year. Applications and requests from local organizations for funds this year are:

During the Public Hearing, there were two speakers representing Dorcas Ministries and the Tammy Lynn Center, both of which receive funding through the Community Development Block Grant. Both representatives thanked Town Council and talked about the programs and services they provide.

There were also three speakers who criticized the grant process. These speakers said the application process values organizations that already have large resources over those that spend most of the money they take in. One speaker said organizations such as Dorcas and the Tammy Lynn Center are good examples that spend their funds effectively in the community while also criticizing that groups such as the Carying Place are not receiving any of this block grant funding.

All three speakers also made veiled references to one of the recipient organizations receiving funding for several years without providing any results and also said funding is going to building new houses instead of rehabilitating damaged or dilapidated housing, which they said would be more cost effective.

The Cary Town Council will take this action plan up for a vote at a future meeting.

Other Town Hearings and Votes

There was only one other Public Hearing on the agenda, and this was to rezone 0.41 acres in Downtown Cary along S Academy Street and Walnut Street, which is located adjacent to the Downtown Cary Park and the new Downtown Cary Library. The land would be rezoned to Town Center – High Intensity Mixed Use. This is a Town-initiated rezoning, which is uncommon. 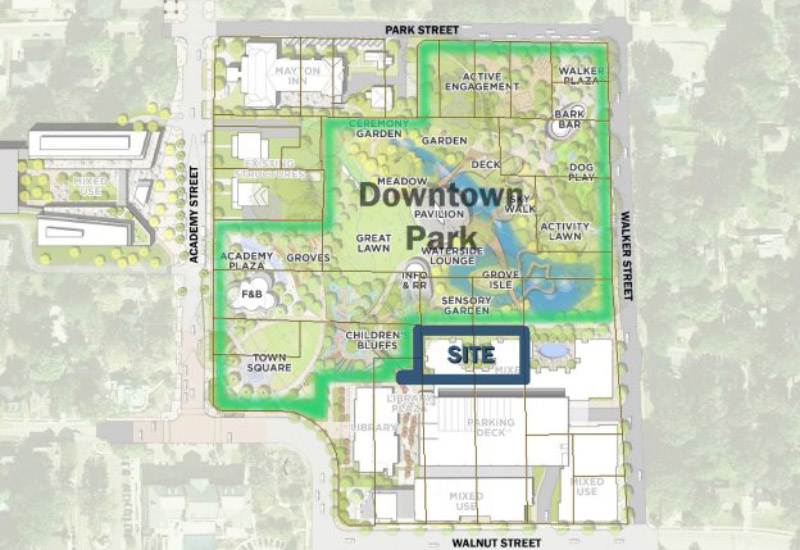 The location of the high intensity mixed use rezoning

There were no speakers at this Public Hearing and the proposal now goes to the Planning and Zoning Board for their determination.

The only Discussion Item on the agenda was the sale of two Cary fire trucks. These trucks are no longer useful to the Town of Cary and are being sold to Guilford Technical Community College and the Town of Nashville, located near Rocky Mount, for training purposes.

The sale brings in $200,000, half of which will be used for an aerial ladder replacement truck and the other half added to Cary’s general fund. Discussion among Town Council was brief as they mentioned the times the Cary Fire Department has helped other North Carolina communities and said this is a reflection of Cary’s values. The sale passed unanimously.

There were several speakers at the Public Speaks Out segment, three of whom spoke in opposition to the Roberts Road rezoning proposal which would put townhomes on 36.42 acres. All three speakers were opposed, with one speaker saying she was upset that discussions with the developer have not changed the proposed density. She also said the public comment process at Town Council meetings allows developers more opportunity to speak and show graphics than it does surrounding residents.

There was also a speaker who reiterated his opposition to a proposed rezoning for an office along Green Level West Road, in the White Oak neighborhood. This rezoning has not yet been to the Planning and Zoning Board, nor is there a date for that meeting at this time.

The only other speaker was a representative for Red Storm, a Cary-based video game company, who spoke to thank Town Council for delaying their vote as the company continues discussions with surrounding neighbors about their proposal to change their parking lot.

This meeting had several recognitions, including proclamations for both Bike Month in May as well as Earth Day. While Earth Day was on Monday, April 22, this proclamation recognizes “Cary Earth Day” on Saturday, April 27, 2019, which is also Spring Daze in Cary.

And Town Manager Sean Stegall reminded everyone about Cary’s medication collection this Saturday, April 27, at sites around Cary.