Cary, NC – The latest Cary Town Council meeting saw a limited agenda, though council did hold a Public Hearing for the new fiscal year’s budget and had two quasi-judicial hearings, in which Cary Mayor Harold Weinbrecht continued to criticize the new state law on those proceedings.

Note: Mayor Pro Tem Lori Bush was not present at this meeting and Council Member Jennifer Robinson participated in the meeting via phone.

There were two speakers at this Public Hearing, both representing local non-profits. Justin Booth, board president of the Carying Place, spoke to thank Town Council for funding for the organization, which houses homeless families in Cary. Also speaking was a representative for the Barbershop Harmony Society, who asked for funding for an upcoming singing Summer camp for children.

The only other Public Hearing at this meeting was an an annexation for a property near the intersection of Medfield Road and Princess Anne Road. There were no speakers and no discussion from Town Council, and the annexation was approved unanimously.

Council Member Jennifer Robinson did not participate in this part of the meeting.

There were two Quasi-Juidical on the agenda at this meeting, the first of which was for a one-story office building on Kildaire Farm Road. Because the developers cut down 31 Leyland Cypress trees on the property line before their development plan was approved, town ordinances required a hearing to be held. 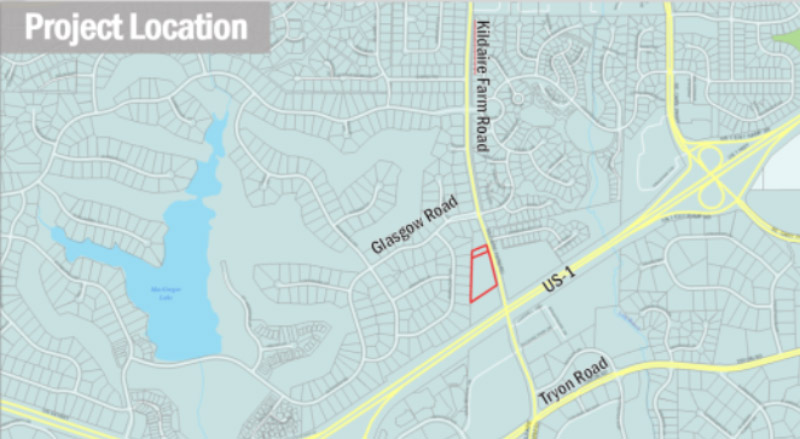 Both town staff and engineers hired by the applicant talked about the development and the connected driveways linking Kildaire Farm Road to the office site, and Council Member Don Frantz confirmed that these meet with town codes.

“The only reason we’re here is because they accidentally cut down some trees,” Frantz said.

Frantz also asked about how the tree buffer that was cut down will be replaced. The new vegetation will not be all Leyland Cypress trees but will be a mix of trees and bushes. For cutting down the 31 trees, the developer has paid a $292 fine.

Council Member Jack Smith expressed concern connecting the office’s driveway to such a large and busy road, and also appeared uncomfortable with the size of the fine relative to the number of trees the developer cut down. In the end, Smith was the only no vote on this hearing.

As council members asked questions about the uses here, Weinbrecht repeated his frustrations with new state laws related to municipal Quasi-Judicial Hearings, namely that if credible evidence is presented in support, Town Council must approve unless there is credible evidence presented in opposition, which there is not in this case.

During Public Speaks Out, one resident spoke fervently against a plan to rezone land on Green Level West Road for an office building. The resident, who said he lives in the adjacent neighborhood, said he believes Town Council will approve this plan and called them “spineless,” accusing them of only wanting to approve this rezoning to avoid a lawsuit with the applicant. The speaker also said he will leave Cary if this rezoning is approved.

Also speaking was a downtown resident who thanked the Cary Public Works department, specifically the event staff, for their work in setting up and then taking down local events.

Story by Michael Papich. Photos courtesy of Hal Goodtree and the Town of Cary.