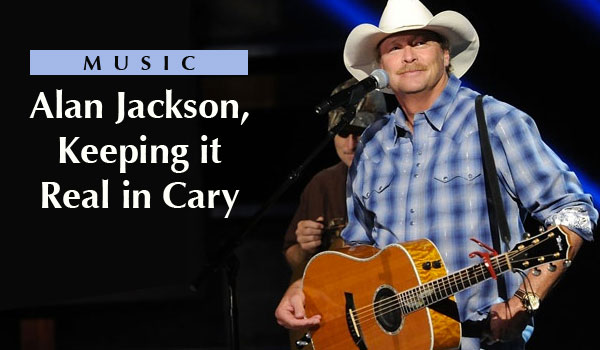 Story by Matt Young. Photo by Rick Diamond from AlanJackson.com.

He’s got just a few more pounds on him, but still wears his trademark cowboy hat. He was one of the few country stars that refused to jump the bandwagon that was changing country music to pop glitz in the early ’90’s.

For the steel guitars no longer cry,
And the fiddles barely play,
But drums and rock ‘n’ roll guitars,
Are mixed up in your face,
Ol’ Hank wouldn’t have a chance,
On today’s radio,
Since they committed murder,
Down on music row.

This year Jackson added Cary’s Booth Amphitheatre (pronounced am-phi-thée-ate-er!) to his tour as a late addition in May on his way east from California and on his way to Pennsylvania and Virginia.

As expected, I went to a concert at Koka Booth scheduled – it just so happens – wait for it – on a rainy night. A month or two ago I joked about the $5 Saran Wrap ponchos the beer vendors sell at Koka Booth. I brought mine again, and used it. The rain shortened the concert just a bit, with one stoppage.

In true Jackson style, he didn’t bore us with peddling his new stuff, or covers of other country artist’s songs (with the expected and obvious exception of Tom T. Hall’s “Itty Bitty”).

He played all his hits songs from the early 90’s when he was tearing up Nashville: “Chattahoochee”, “Don’t Rock the Jukebox”, “Gone Country”, “Where I Come From”, “Who’s Cheatin’ Who” and others.

Here’s a short free ad for Koka Booth Amphitheatre. If you like music, and I know you do, and you live in Cary or within 50 miles of Cary – see a show there. It has a laid back and pretty darn wholesome atmosphere. There’re never lines at the concessions, the staff is always friendly and even at the most crowded show – you never feel “closed in”. And it’s a good value compared to other major concert venues in the Triangle.

And even though it has rained at every concert I have ever been to there (slight exaggeration), they got ponchos.

He was always proud of what he had,
He said his greatest contribution,
Is the ones you leave behind,
Raised on the ways and gentle kindness,
Of a small town Southern man.

Events coverage on CaryCitizen is sponsored in part by the Cary Scavenger Hunt.