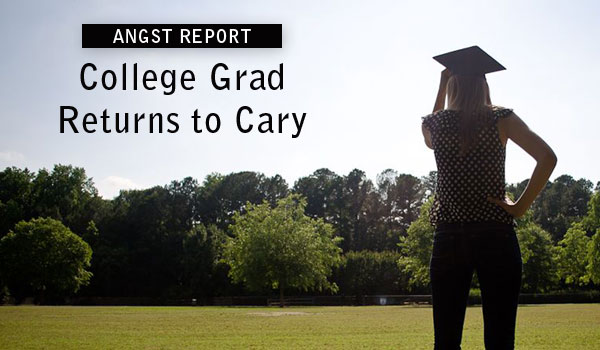 Cary, NC – The deceptively innocent question, “So, what’s next?” becomes somewhat of a cruel cliché when asked of soon-to-be college graduates or recent grads. We hear it so many times that our responses start to sound scripted. In many cases—at least when the answers are less than promising—they actually are, because “I don’t know” never satisfies. At least for me, directing this question inwards provoked a series of existential crises that eventually escalated into a full-blown quarter life crisis. Yes, that’s really a thing. Google it.

It wasn’t just my uncertain future, the scary headlines about unemployment rates among college graduates, my impending eviction from academia’s comfy cradle, or the prospect of an endless cycle of internships that generated my final-semester panic. I was also horrified of ending up back at home. In Cary.

There has been a bit of hubbub lately surrounding Cary’s lack of “Millennials,” also known as Generation Y. I was one of this age group’s few representatives at the recent Imagine Cary Summit, where I learned that Cary has a significantly smaller percentage of residents between the ages of 20 and 29 than Raleigh, Wake County, and North Carolina. Most of us who grew up in Cary in the late 1980s and early 1990s leave for college… and don’t come back.

Nevertheless, I did end up there after graduation, and found myself savoring my time in my hometown. Few other places are as serene as my own backyard in one of Cary’s “older” neighborhoods – though not beautifully manicured like other lots in town, its lovely wildness and quiet, scurrying life dazzle on late afternoons in summer. Creeping ivy and half-foot saplings are slowly reclaiming the shady, forest-bound yard where I used to play badminton on bare feet. My house, now over twenty three years old, shows its age in well-worn carpet and dated wallpaper. Timeworn photos of middle school friends have faded on a sunlit wall. This place has grown up with me.

I was beginning to look forward to spending more time in Cary—realizing my nightmare of “ending up” there was more like a dream—when I was offered an internship in Washington, DC that I couldn’t refuse. I haven’t spent more than several weeks at a time in Cary since I left for college four years ago, and this summer will be no different.

Sometimes I don’t even fully unpack my bags; I live out of a suitcase in my own house.

Now that I’m living in DC, I couldn’t be happier. It has everything a person of my generation could want: the freedom of not needing a car, dense, walkable neighborhoods, a plethora of (often free) cultural offerings, restaurants serving almost every type of cuisine, and immense opportunity to explore many possible answers to the question, “So, what’s next?” After only a week here, I’ve already caught the bug of urban life.

But my ephemeral Cary summers—and Christmases and Thanksgivings—will still be some of my favorite parts of the year. Cary is not only a calming escape from college or, now, professional life; it’s also where the people (and animals!) I love are most concentrated. After living in rental after rental after rental, Cary is still the only place in the world where my bed, my room, my backyard, my town exist. As a transient twenty something, I treasure the sights, smells, and comforts of my one and only home, and I’ll always go back there, if only for a couple weeks at a time.

Here are a few of our favorite stories from previous CaryCitizen interns and student-contributors.

Two Great Concerts in One Week