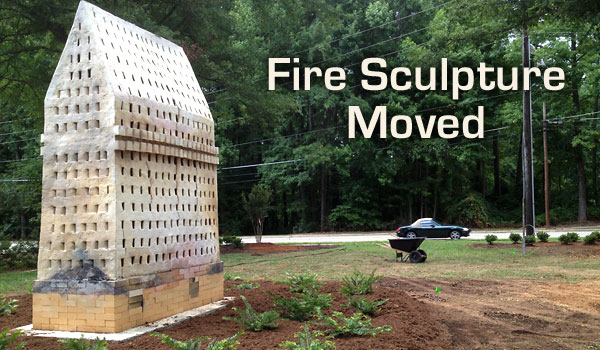 Cary, NC — Relax everyone, the Fire Sculpture has been moved. It will no longer enrage passing motorists at the corner of Dry and Academy.

We first started talking about the Fire Sculpture (officially titled The Meeting Place) when it was being built last October.

The grand reveal of the fiery creation, glowing and sparking in the night, took place on November 2, 2012. 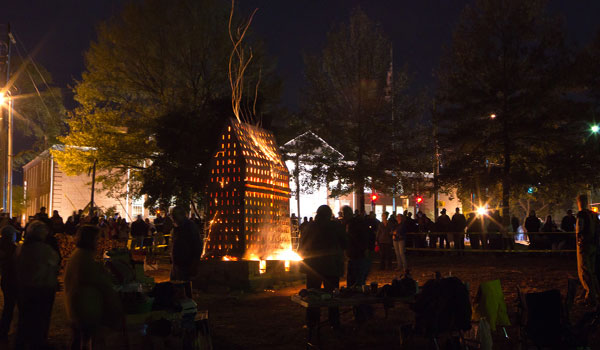 At the time, people loved the excitement and drama of sculpture as performance art.

But the magical night ended, and the next morning dawned on a far less enthusiastic assessment of the Fire Sculpture.

For one thing, it was cracked. All normal, said the artist, Nina Hole. It’s a big piece of pottery after all. 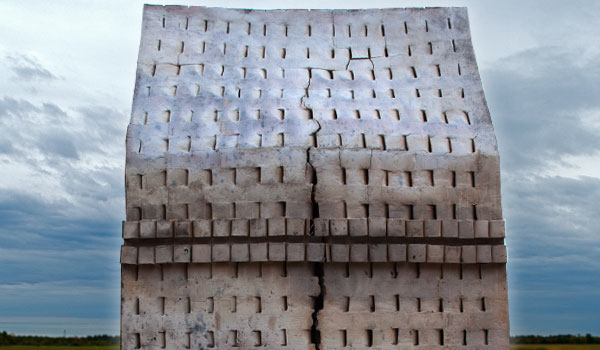 Many others simply did not like the artwork in the shameless light of day. Still more piled on, including people opposed to public art and others opposed to anything under the direction of Town of Cary staff.

Let’s be frank – it was kind of an eyesore. All alone in a raw field across from Cary Arts Center, it painted a picture of dereliction at a key corner in Downtown Cary. Maybe the Fire Sculpture would have looked more at home once some landscaping put the piece in a proper setting.

But the community couldn’t wait for shrubs to grow and plans to finalize for the Downtown Park.

The Fire Sculpture had to go.

Fire Sculpture Gets a New Home

Last Sunday, the Fire Sculpture was moved about a 1/4 mile to a vacant plot at the corner of Pleasants Avenue and Kildare Farm Road. See it on a Map.

This afternoon (Tuesday), the landscaping had already gone in and, by golly, the Fire Sculpture looks better. Like an old friend who got a haircut and a shave. 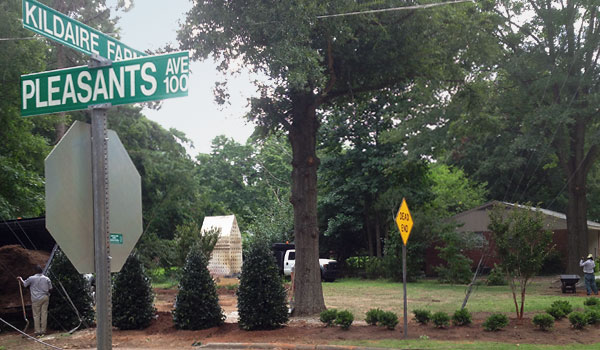 It’s a quiet spot, with some talk of making it into a “pocket park.” A bench or two would be nice.

I hope they light it up at night, maybe from the inside.

Whatever the Fire Sculpture was originally meant to signify, it has now truly become a part of Cary, a meditation on the fragility of what we build and the complex interaction between art and society.

Photos for this story by Brooke Meyer, Lindsey Chester and Hal Goodtree.