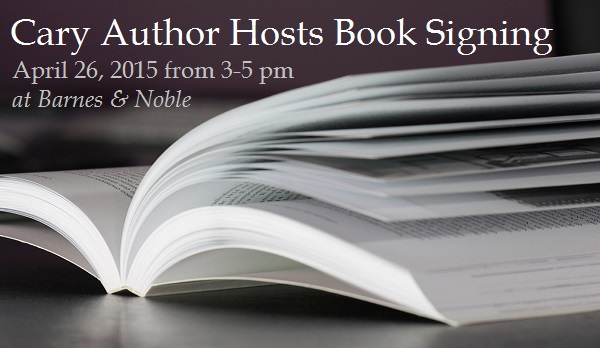 Cary, NC — This Sunday, April 26, 2015, join author April Riley Bolejack at Barnes & Noble in Cary for a special book signing and discussion as she tells stories from her new book about what life was like growing up in Cary in the 50’s and 60’s.

On Sunday, April 26, 2015, at Barnes & Noble in Cary, April Riley Bolejack will return to her hometown to sign copies of her new book, Double Dawg Dare Ya…Growing up in Cary, NC in the 1950’s and Other Adventures.

In Double Dawg Dare Ya, April tells stories about what it was like growing up in Cary during the Baby Boomer era. At this weekend’s book signing, she will share those stories and others. I contacted April to learn more about her new book and about the stories she plans to share.

This is what she told me.

A Sneak Preview from April…

I lived in Cary from 1947 until 1966. I moved into a house on Keener Street and stayed there until my wedding day. My fondest memories are those that reflected the innocence of my era…we were able to explore and visit almost anywhere. Keener Street had over 20 children who played together every day and every night. We had little in the way of play equipment, but we had no problem finding lots to do.

The memories I chose to include were those that reflected important relationships between myself and my family/friends. Hopefully, the events reflect my daredevil nature and the sense of fun I found all around me. I think sharing memories is so important, for if the memories are not recorded for others to learn from…well, maybe the knowledge garnered is lost forever.

April will discuss and sign her recently published book, Double Dawg Dare Ya…Growing Up in Cary, NC in the 1950’s and Other Adventures.

At CaryCitizen, we are always interested in learning more about Cary’s history and sharing it with our readers. After contacting April, I can tell that her new book will be an entertaining way to do so. If you too are curious about our town’s history, check out some of our articles about: