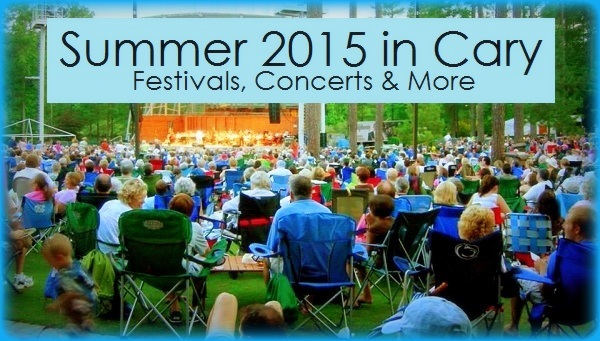 Cary, NC — This is your complete guide to outdoor concerts, large-scale festivals, moonlight movies, kids activities and more in Cary throughout May-August 2015.

2015 Guide to Summer Events in Cary

We try to keep you updated on what’s going on around town year-round through our calendar of events and weekend events stories, but everyone knows that summer in Cary is packed full of concert series, festivals and more. Consider this your guide to it all.

NC Symphony Summerfest
Koka Booth Amphitheatre, 8003 Regency Parkway, Cary
Concerts in the diverse 2015 Summerfest series take place May 23-July 9. Concertgoers may bring picnics, blankets and lawn chairs as early as 5:30 p.m. to enjoy the striking natural surroundings before the music begins. Lawn tickets start at $28; children 12 and under are free.

Live at Lunch in Downtown Cary ends May 28, 2015
Fidelity Bank Plaza, 100. W. Chatham Street, Cary
Every Thursday in May from 11:30 am-1:30 pm, the Town of Cary will host Live at Lunch, a free concert series, downtown. Tables and chairs will be set up on the Fidelity Bank plaza, and attendees are encouraged to bring a lunch–from a downtown restaurant or home.

LIVE in the District ends June 18, 2015
Park West Village (in front of Stone Theater), Morrisville
Each Thursday through June 18, 2015 bring your lawn chairs and blanket and join Park West for live music from 6 pm-8:30 pm. There will be face painters, balloon artists and drinks for sale.

Festivities start at 11 pm, but get there early to hear DJ B4.

Wind Down Wednesdays ends July 29, 2015
Waverly Place, corner of Cary Parkway and Tryon Road
Starting on June 3, 2015, enjoy a series of free concerts on the promenade every Wednesday from 6-9 pm. Bring lawn chairs and blankets, and purchase hand held food from a variety of food stations. All concerts are free and open to the public.

PineCone Bluegrass Concerts
Sertoma Amphitheatre at Bond Park, 801 High House Road, Cary
PineCone and Cary are working together this summer to provide a series of free, outdoor bluegrass concerts to the public. All shows are free and start at 6 pm unless specified otherwise.

Movies by Moonlight
Koka Booth Amphitheatre, 8003 Regency Parkway, Cary
For only $5 (kids under 12 are free) patrons can bring a blanket or chair as the spacious lawn at Koka Booth becomes an outdoor movie theater. No pets are allowed, but picnics (including beer and wine) are. Movies By Moonlight proceeds benefit the WakeMed Children’s Hospital.

Movies starts at dark (approximately 8:30 pm), and the gates open at 7 pm.

Wheels on Academy Car Show
Saturday, May 16, 2015; 9 am-2 pm
Academy Street in Downtown Cary
Find that special car that evokes memories of the past or dreams of the future. Academy Street will be enlivened with entertainment, food, and fun for the entire family.

Dog Days of June
Saturday, June 6, 2015; 9 am-1 pm
Bond Park Field 6, 801 High House Road, Cary
A day of family fun for you and your dogs. Compete in a disc competition, vaccinate or microchip your pet, give him or her a bath and visit with local pet-focused vendors and rescue groups raising money to donate to canine charitable organizations.

Lazy Daze
Saturday, August 22, 2015; 9 am-5 pm
Cary Town Hall Campus, Downtown Cary
Lazy Daze is one of the largest single day juried arts festivals in the country. This is its 39th year. Due to construction, this year’s festival will be moved to Cary’s Town Hall Campus.

Tuesdays for Tots
Koka Booth Amphitheatre, 8003 Regency Parkway, Cary
This family-friendly event offers a morning of story-telling, creative movement and play and stroller walks around Symphony Lake. It is also designed to provide opportunities for parents and care-givers to connect with each other and for kids to get outside. Admission is free.

Didn’t Find What You Were Looking For?

Find a complete listing of Cary events on our CaryCitizen calendar, and follow us on Facebook to stay engaged on what is happening around town.

The CaryCitizen summer events guide is sponsored in part by Rally Point Sport Grill, Wind Down Wednesdays at Waverly Place and Mosquito Wizard.

Garden: How to Create Hanging Baskets

5 Ways Walking Leads to a Healthier You
Scroll to top